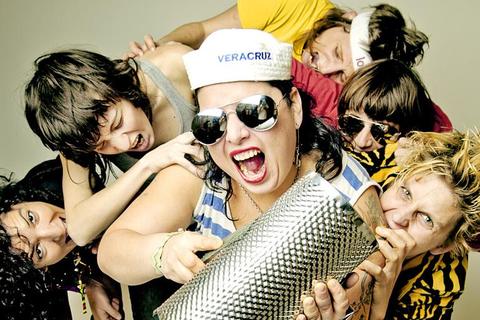 Las Kumbia Queers are a six women Cumbia band from Argentina and Mexico. In the summer of 2012, they released their third album "Pecados Tropicales" – producing a captivating mixture of music styles, bringing a new sound to old songs while managing to stay true to Cumbia. The songs deal with everyday issues like love, desire and fear, and the music lingers with you.

One day in Buenos Aires, six musicians from Argentina and Mexico who were bored of the punk rock scene at the time, decided to do something completely different: Cumbia. What started out as something just for fun, eventually led to the formation of Kumbia Queers in the summer of 2007 – even though they weren't yet quite sure how to actually play the old music of the ghetto (“Cumbia Villera”). But – according to leadsinger Ali – everyone has a bit of Cumbia rhythm in their blood...

They describe their style as 1000% Tropi Punk – a wild mixture of Afro-Cuban and Latin American Cumbia influences, queerness and punk spirit. At a time when the electronic and world music scenes from New York to Europe are in the process of discovering Cumbia music, the chicas are reinterpreting Latin American heart-aching macho posturings, bringing fun and politics together in their own wild style.

Singer Ali Gua Gua about the band's concept: “When we started, we said that we wanted to make songs by girls for girls, now we’re making songs by girls for men... No, just kidding! But if punk rock groups normally take the eternally angry youth as a model, we're going for just the opposite: for us, it’s all about the joy, the fun, the sensuality.”

Their mixture of punk, Cumbia and queerness is pretty unique in Latin America – and all around the world. In Argentina, Chile and Mexico, they already have a solid fan club base.

In 2010 and 2012, Kumbia Queers toured Mexico and played at Vive Latino, the biggest festival in Mexico City. Their clever mix has already gotten these six women pretty far. No two concerts are the same – whether it’s at the central Platz Zócalo in Mexico City, a home for the elderly in Chile or a prison for woman in Buenos Aires.

Over the last few years, they have also managed to infect Europe with the Tropi Punk virus. From Södra Teatern in Stockholm, to the Incubate Festival in Tilburg, to the Chico Trópico festival in Madrid and SO36 in Berlin: Kumbia Queers rocked every stage in 2012. In the summer of 2013, the band will be back to shake up the streets, and especially the stages, of Euro