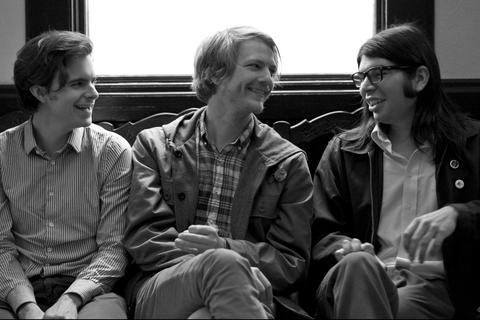 Listen through the ethereal haze that Brass Bed has created on The Secret Will Keep You, and you will find a soulful band suspended in a moment of frustration and anxiety. It’s the sort of frustration that comes from growing old and realizing that the light at the end of the tunnel may just be the remnants of some dying star. You were a kid once. Maybe your dad put you on his knee and said “Kiddo, you sure are handsome, smart, and talented. The sky is the limit if you set your mind to it!” Well the truth is, that was kind of bullshit. Chances are, you were only one of those things if any of them at all, and you’ll spend your life amid the great unwashed, grasping at whatever straws you can to express a promised individuality that’s slowly turning out to be lie. They also didn’t tell you that your dream job, your dream girl, your dream you, were really all just that: dreams.The Secret Will Keep You is a cold awakening from that fever dream sound.

After two album cycles playing studio maestros and pop aficionados, the Louisiana quartet found itself confused. On the one hand, it had cultivated an image of playful poppiness, a kind of 21st century mop topped fuzz rock that sought to dilute the dourness of their records lyrics with saccharine pieces of earcandy. Sent through the band’s itchy live energy, the songs became faster, trashier, and splendidly erratic, creating a disconnected identity between studio and stage. As they settled down to make their 3rd LP, they were determined to ditch the obtuse lyrics, playground song craft, and squeaky precision and bare their teeth, plaque and all. The result is a maddening blend of swirling, biting psychedelia, at once as pensive as a black hole and explosive as a dying star. A universe of guitar feedback and deconstructed keyboard beds pulling the listener apart in the gravity of full analog stereo.

The band recorded The Secret in a single 10 day session with Danny Reisch at Public Hi Fi Studios in Austin, Texas, putting everything down live to tape. The compressed schedule and quick change recording methods helped Brass Bed capture the anxiety, humor, and honesty that is the molten core of this record and also the spirit of the band at the time of its creation.

From the wry and acerbic indictment of faith in “Cold Chicory” to the pleading lonesomeness of “I Guess I’ll Just Sing” to the outright romantic frustration of “A Bullet For You,” the album invites listeners to join the band as they traverse what lies between joy and regret, bliss and distress. These creations are still living, breathing things and that Brass Bed will only inject with more life and spirit as they continue to grow as writers and musicians. Catch up with them now before they leave you in their considerable wake.