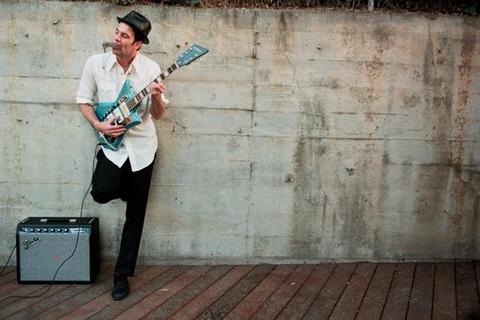 Twenty years after the release of their self-titled debut and eight years since their last live performance together, the original lineup of G. Love & Special Sauce return with their first album in nearly a decade. Built on the trio’s signature hip-hop blues sound, Sugar finds vocalist/guitarist/harmonica player G. Love (aka Garrett Dutton), upright bassist James “Jimi Jazz” Prescott, and drummer Jeffrey “The Houseman” Clemens breathing new life into their groove-heavy, Chicago-blues-infused brand of stripped-down rock & roll. “The goal for the album was to make it really raw and immediate, with live takes and live vocals and everybody playing so that it all comes together in that intangible way,” says G. Love. “That’s what our music is all about.”

Recorded mainly at Brushfire Records’ “Solar Powered Plastic Plant” studio in Los Angeles, Sugar captures the unstoppable energy of a band who got their start in Boston bars in the early ‘90s and still play up to 150 shows a year. “We wanted to take it back to the old-school vibe of the first record, those rich, warm sounds from when we were rocking small clubs and going on that acoustic feeling,” says Prescott. To deepen that dynamic and push their sound into new directions, G. Love & Special Sauce called in guest musicians like Los Lobos guitarist David Hidalgo (who appears on three of the album’s tracks), soul/R&B singer/songwriter Marc Broussard, and the legendary vocalist Merry Clayton (best known for her duet with Mick Jagger on the Rolling Stones’ “Gimme Shelter”). “Recording at Brushfire was one of those super-magical sessions—it just felt right and really true to the style of this band,” notes G. Love, who also recorded several of Sugar’s tracks in Seattle with Clemens and bassist Timo Shanko.

While most of the first songs G. Love penned for Sugar were written in response to a recent breakup, the album ended up morphing into a gritty but joyful look at the thrill and grind of getting by as a musician. At the album’s heart is the swaggering title track, which fuses Elmore James-inspired slide licks with big and bouncy hip-hop beats. That mood is matched on tracks like “Good Life” (a Bo Diddley-style jam powered by the fiery guitar work of David Hidalgo), “Saturday Night” (a steamy serenade to New York City, laced with sultry vocals by Alabama-bred folk/soul singer/songwriter Kristy Lee), and “Weekend Dance” (an all-out party anthem fueled by sweet and smoldering horns, co-written by Eric Krasno and featuring rapper Shamarr Allen). Meanwhile, “Too Much Month” serves as a brilliantly bittersweet ode to being broke (“I got too much month for the end of my money/And not enough money for the end of the month”), and “Nite Life” slyly warns of the dangers of rock & roll living in its groove-laden take on John Lee Hooker’s “Whiskey and Wimmin.”

Peppered throughout Sugar are a handful of love songs of all stripes, from the moody, brooding breakup ballad “Windshield Wipers” to the bruised but breezy “Cheating Heart” (featuring Eric Krasno on lead guitar and background vocals) to “Bad Girl Baby Blues” (an acoustic, guitar-and-vocals-only track whose lyrics spin a daydream tale of an ideal night at home, complete with drinking red wine out of pawn-shop-bought glasses). And on “One Night Romance” (written by Kristy Lee and featuring vocals from both Lee and Merry Clayton), Sugar turns soulful and seductive in its harmony-soaked plea to “come get unlonely with me.”

In bringing Sugar to life, G. Love & Special Sauce mined musical sources as varied as the hypnotic blues-guitar work of John P. Hammond and John Lee Hooker, the boundary-bending rhythms of The Meters and Lee Dorsey, and the infectious beats and seamless flow of hip-hop pioneers like A Tribe Called Quest, The Beastie Boys, and De La Soul. And although each band member brings his own distinct influences to their creative collaboration—G. Love’s lyrics draw inspiration from the street-wise storytelling of Lou Reed, Prescott is highly studied in New Orleans jazz, and Clemens’s drumming references everything from early-‘70s Nigerian funk to the rocksteady era of reggae—Sugar again reveals the uncommon intensity and power of their musical synergy. “There’s a certain natural, unspoken chemistry between the three of us,” says Clemens. “Because we’re all very different individuals and oftentimes do our best communicating through our instruments, we’re able to meet in a musical conversation where others might not be able to.”

For G. Love & Special Sauce, that conversation began back in 1993, when G. Love serendipitously took the stage as a fill-in opening act at the Irish pub where Clemens’s then-girlfriend waited tables. “I’d had this idea that I needed to find a kid who could play blues but also rap, and that’s exactly what I got,” says Clemens. “It was like, ‘This is the kid that’s speaking the language I hear in my head.’” Then 19, G. Love had recently moved to Boston from his native Philadelphia, where he first picked up a guitar at age eight and spent much of his teen years as a street musician. “I grew up right by a place called South Street where there were a lot of street performers, from puppeteers to this guy playing Mozart on wine glasses to classical guitar players,” he says. “One night I was out there and I finished playing a riff on my song and started rapping the lyrics to ‘Paid in Full’ by Eric B. & Rakim over a groove, and I was like, ‘Holy shit—that’s it.’” Heading to Boston the same summer he first started developing that hip-hop/blues hybrid, G. Love quickly connected with Clemens, who then tapped Prescott (a local musician he’d met through a jazz jam session). Within a week the three got together for a rehearsal—featuring G. Love on Dobro guitar, Clemens on a vintage drum kit with brushes instead of sticks, and Prescott on upright bass—and soon began working on songs for their debut album.

Propelled by hit singles like “Cold Beverage” and “Baby’s Got Sauce,” G. Love and Special Sauce ultimately reached gold status and helped the band build a following that endures today. One of the songs originally written for that album (and inspired by G. Love’s early days in Boston and “those nights when I would just walk around and try to get somebody to buy me a pint of Jim Beam”), “Run for Me” makes its first-ever recorded appearance on Sugar and remains timeless in its portrait of the struggle of pursuing a musical passion. “At first I thought this record was gonna be a heartbreak record about my old relationship, but then the sentiment shifted,” says G. Love. “A lot of the songs became about coming up from where we started to where are now and still keeping it going, still staying afloat,” he continues. “To me that’s a much more interesting story to tell.”