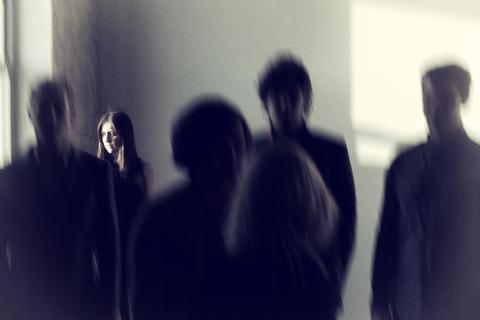 There is something decidedly mystical about HAERTS’ story and it’s reflected in their sound, a kind of elegiac but warm electro-pop, which is showcased on their debut EP, Hemiplegia. Fittingly, you can almost narrate the band’s entire trajectory via the personal astrology charts of its members—an international constellation composed of Nini Fabi, Ben Gebert, Garrett Ienner, Derek McWilliams, and Jonathan Schmidt. Every time something major has happened for HAERTS, it seems to center around the birthday of a band member or someone close to them.

HAERTS began in a small Greenpoint apartment in the early fall of 2010. Long time musical collaborators Nini Fabi and Ben Gebert hoped to locate that emotional and sonic spot between the familiar and unknown. If this all sounds a bit romantic, like the fantasy of many young musicians who seek out Brooklyn as the backdrop to their musical love affair, it’s because it is.

“When we moved to America it was in the back of our minds that we would never come back,” explains Fabi, who grew up in Germany and has known Gebert since they were on a swim team together as teenagers. “People always say that when you come to New York, you need to have a plan or something lined up. We had nothing lined up. We just came here. We knew we needed to live here and make music.”

“Ben and I have known each other since we were fifteen,” Fabi explains. “But at first I was hesitant to make music with him because he was a little further along and I was secretive.” Fabi, who was born in Ohio before moving to Germany, was raised in a family where music and art was extremely important and at the core of everything. “I sang with my sister,” she says. But Gebert, a native German, had been playing piano since he was three and was composing his own music by age ten. “I studied formally in high school and we all went to college for music as well,” Gebert recalls. “He came from that crazy classical schooling,” Fabi says.

The formality of that schooling initially seemed to contrast with what music was to Fabi, namely, a kind of interior, intimate, emotional thing. “It was so important I almost didn’t want to share it with anyone because then I could lose it,” she explains. The first song they wrote was a birthday present for a friend. “It was utilitarian,” Fabi says, laughing. “We didn’t have a gift for him so we wrote him a song!” They were only 15 years old at the time but the productive tension they discovered still animates HAERTS’ creative core. “Benny is still the guy that’s the foundation in the songwriting, he’s on that composition element and I’m still the one more interested in melody and words,” Fabi says. Gebert agrees. “I would literally never write lyrics. It wouldn’t occur to me.” Fabi laughs. “Basically, I was always more concerned with what we’re trying to say and Benny was more concerned with how we’re saying it. That’s still exactly how it is.”

A few years later the pair moved to Boston to study. There, they met and began collaborating in other projects with HAERTS drummer Jonathan Schmidt and bassist Derek McWilliams. The general flavor of the music Fabi and Gebert made at the time could loosely be described as Americana; they wanted to intimately understand the nature of songwriting and melody, how to build something elegant and efficient and pure. Eventually, though, the pair began to get a bit restless; they craved expansion. That’s where Brooklyn came in. “We both love it here and would live here regardless,” Gebert says, “but we wanted to be here in part because there was a lot of music that we liked being made here.”

New York had more than just music to offer. “We wanted to do music but we didn’t want to be in a place where that’s all there is,” Fabi explains. “It’s important that New York has all this different cultural influence.” That broad-spectrum culture was a reflection of what the pair was craving sonically.

Confined to their Brooklyn apartment, Fabi and Gebert began to search for this elusive other sound. Progress was made but it wasn’t until the pair connected with Jean-Philip Grobler of St. Lucia that the new challenge they were seeking really presented itself. Again, there was a birthday involved; this time, a mutual friend’s birthday party at a bar. A few days later, Fabi and Gebert found themselves at Grobler’s South Williamsburg studio listening to some work he’d done with a friend of theirs. They were impressed. By the summer of 2011, Fabi and Gebert decided to share what they’d been working on with Grobler, who loved what he heard. “We went into the studio the next week and that’s how it started,” Fabi says.

At first it was a little scary to be working with another person after so much time spent in a creative cocoon. The pair had never before worked with a producer. But it was also fun, and very productive. Within six months they’d recorded enough songs for an entire album, many of which will be included on HAERTS’ forthcoming debut full-length. “We had a connection with him that you only have with very few people in your life,” Fabi says of Grobler.

Even though Fabi in particular initially felt wary of synthetic sound, they really enjoyed messing around with all of Grobler’s cool gear. “When we first started recording with Jean, we were like, ‘Oh that’s cool, what’s this?’ We’d ask, ‘What’s this pedal?” Fabi recalls. “He would always answer ‘Oh, it’s not mine, it’s Garrett’s.’ Every time we asked about something, he’d reply, ‘It’s my friend Garrett’s.’ Finally, we had to know. Who is this Garrett guy?!” That would be Garrett Ienner, now HAERTS’ guitarist.

"We had been looking for a third creative and emotionally involved member,” Fabi explains. “A partner who was on the same page as us, who needed this music as much as we did, who would live for it 100 percent. We felt that Garrett was someone who could grow with us and who we could grow with."

A longtime New Yorker and member of the music community, Ienner worked with Grobler on and off for years. While Fabi and Gebert were finding their way to a new sound, Ienner had been taking a break from music. After a late night at work, he showed up at Grobler’s birthday party and met Fabi and Gebert for the first time. Ienner had hardly touched a guitar in two years but he soon realized this was right. "I reached a breaking point after such a long period of time of not playing,” Ienner says. “It crept up on me, and I suddenly realized I couldn't go on anymore without making music. I was really looking for a project to belong to, a place to eventually call home.”

Behind the scenes, Grobler was working to unite Fabi and Gebert with Ienner, and as luck would have it, the stars finally aligned. “We were a little hesitant to work with him because we liked him so much as a friend,” Fabi says. So they took things slow at first. Shortly after throwing Ienner a birthday party, Fabi and Gebert sent him six or seven songs. “Aesthetically I’m into a lot of the same sounds that Nini and Ben are into. It just felt really natural,” Ienner explains. "We hadn't even known each other for that long at this point, but we already had such a strong personal bond." About a week later, they went to Grobler’s studio. “All of your gear was already there! Your spirit was there from the beginning!” Fabi says to Ienner, laughing. “No, seriously, he came in and we played and it was just perfect. We knew it right away.”

Last fall, HAERTS knew it was time to let one of the tracks they’d been carefully working on see the light of day. They all agreed “Wings” made the best first impression. "Musically there is a lot happening in the track, but at its core, ‘Wings’ is rooted in songwriting,” Ienner explains. “The greatest goal is always to find a way to most faithfully express and maximize the song and its emotion. I think with ‘Wings,’ there is a theme that is timeless but it’s delivered in a way that is modern and can still connect with people.”

“It has a general feeling—a melancholic feeling that is also hopeful and warm with a bit of darkness—that’s in all our songs,” Fabi elaborates. And while they believed in “Wings,” they didn’t have high expectations. It wasn’t until Derek Davies posted the track on his influential Neon Gold blog that the frenzy began. They quickly built their team and found a home with Columbia Records, this time on Fabi’s birthday. After so much time has passed since the project began, HAERTS couldn’t be more excited to finally have people hear more material.

“All the Days” has a haunting, propulsive charm while “All For You” is a timeless slow jam that could be the soundtrack to awkward middle school slow dances for years to come. But “Hemiplegia” is perhaps the most complete synthesis of the band’s sonic and emotional aesthetics. “Ever since I was a little kid, I’ve had this crazy thing where all of a sudden half of my body gets numb,” Fabi says. “I can’t speak. Something in my brain just disconnects and I don’t feel a thing.” The condition comes and goes unpredictably. “When we finally went to the studio to record vocals on a big part of the album, all of a sudden I lost my sense of speech,” Fabi recalls. “I got really scared and everyone was really worried. I started seeing doctors. And I started hearing this word ‘hemiplegia.’” For Fabi, the literal hemiplegia has subsided, but the memory of that feeling of not being able to act when you really want to stays with her. “In the song, I’m not talking about the condition,” she explains. “It’s a metaphor – you see exactly what you want to do but you can’t. Who hasn’t felt that way?”

Making the personal universal is what HAERTS is all about. The sound they’ve built is a reinforcement of the idea that we all feel joy and despair in equal measure and can find something good in sharing it. “This music is so meaningful to us,” Fabi says. “If it can also be meaningful for other people, that’s what we want. I don't think pop music is a bad thing. For me, it means music that a large number of people can relate to and if you really believe in your music, you want everyone to hear it. You want the most people to feel it.”