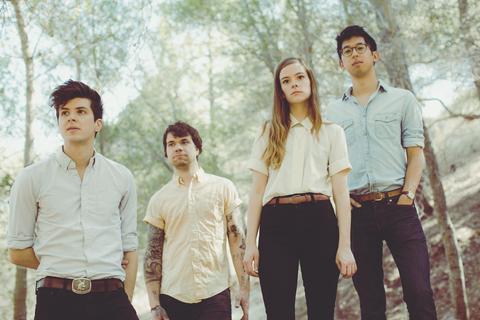 If you were to trace Magic Man's distinctive Americana-inspired synth-rock back to its first innocent glimmers, you'd find a preschool in the suburbs of Boston, where Alex Caplow and Sam Vanderhoop Lee formed the friendship that's still at the heart of their band today. After playing music together throughout their youth, they separated for college: Alex to Tufts, and Sam to Yale. They reunited the summer after freshman year, heading to France to swap their labor for room and board on a series of organic farms, where Magic Man was born during impromptu writing sessions on the duo's midday breaks.

Their summer abroad yielded the duo's 2010 debut Real Life Color, which despite a limited internet-only release, spread from Bandcamp across the internet like a slow-burning wildfire. By the time the band signed with Neon Gold/Columbia in 2012, Magic Man had evolved into a five-piece with the addition of childhood friend Daniel Radin on bass, college friend Justine Bowe on keyboards and Joey Sulkowski on drums. The exuberance of their new live show helped transform the band's sound. When Sam and Alex retreated to the Providence, RI apartment they called the "Fox Den" to refine their material, the lo-fi, mellow warmth of Real Life Color had shifted to the anthemic propulsion that defined the band's resulting Fox Den Demos, which comprise the backbone of the band's first proper studio effort, You Are Here.

Magic Man has spent 2013 on the road with bands like MS MR, Walk the Moon, Grouplove, Ra Ra Riot, and St. Lucia, in support of their release of the You Are Here EP. The music is euphoric, arresting, and has an impressively timeless quality—it's Bruce Springsteen for a generation raised on synths. "We try to evoke emotion with our music, rather than just trying to make something cool," says Sam, but it's clear that they've managed to do both.