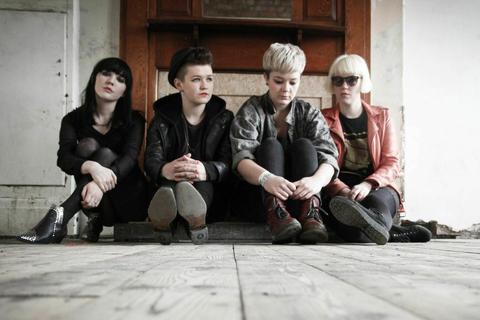 PINS are Faith Holgate, Anna Donigan, Lois Macdonald and Sophie Galpin. They started playing together in early 2011, with Galpin joining the band in February 2013. PINS self-released their debut tracks (A. Eleventh hour / AA. Shoot you) through their label ‘Haus of PINS’ in May 2012 along with a video for ‘Eleventh Hour’ directed by Sing. J. Lee. The tape sold out within a few hours and the video gathered media coverage for the band. Later that year PINS released the EP ‘Luvu4lyf’ through Bella Union on 10” glitter vinyl. Bella Union went on to officially sign PINS and release their debut album ‘Girls Like Us’ in September 2013.

PINS have toured extensively through the UK and have reached out into Europe playing at Fleche D’Or in Paris, Beursschouwburg in Belgium and Nox Orae Festival in Switzerland. Pins have supported the likes of Best Coast, Savages and Mikal Cronin. October 2013 sees the band embark on a UK headline show and support shows with Warpaint and Dum Dum Girls.

PINS mix together post punk, fuzzed up garage, and rock and roll. They have created a distinct sound, and secured their place in the burgeoning Manchester new music scene.

PINS continue to run their ‘Haus of PINS’ label, and have released bands from UK, Ireland and France.

‘In successfully capturing this energy and the visceral thrill of their live shows, PINS have produced one of the most striking guitar debuts of 2013.’
Drowned in Sound

‘To keep things short and sweet this album is awesome. Buy it. Now.”
- Art Rocker