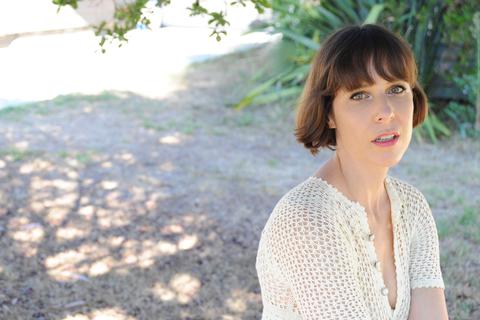 "I didn't fly a kite for thirty years," says Eleni Mandell. "Then I had kids and all of the sudden we were flying kites all the time. It's such a simple, fun thing to do, but along the way you forget."

"This record is really different because [Nick Lowe producer] Neil Brockbank and I
decided we wanted to work together," explains Mandell, who earned the admiration
of Lowe on tour. "There was a small window when that could happen, so I had to write specifically for this record. Instead of collecting songs over a few years that were written more therapeutically, I was giving myself assignments, which was actually freeing because I was writing from outside of myself more."

That Mandell's focus has shifted outside herself is no coincidence. In 2010, the
acclaimed LA songwriter—who's earned raves from The New Yorker and LA Times to SPIN and the Associated Press for an eclectic catalog that evokes everything from Tom Waits and X to Cat Power and Patsy Cline—gave birth to twins via an anonymous sperm donor. Three years later, they accompany her nearly everywhere on the road (a prospect she says is actually less stressful than traveling with a band), and have radically transformed every aspect of her life.

"I used to just wake up in the morning sit in the front window with my guitar and wait for inspiration to hit," says Mandell. "Now everything is different, and I don't have that luxury anymore. My life is so much about my kids and keeping them happy and fed and getting enough sleep and dressed, and I really enjoy that. I like the restrictions. It makes sitting down to write a more special, focused act."

The effect was indeed special on her critically lauded 2012 release, 'I Can See The
Future,' an album which prompted Paste to call her "a songwriter of the highest ilk"
and American Songwriter to hail her work as "timeless." But at the time, Mandell was still reflecting on, as she puts it, "the difficulties and the sadness of trying to have a family and it not happening the way I had imagined." By contrast, 'Let's Fly A Kite' basks in the richness and contentment of single motherhood, and finds Mandell writing with a wit and joie de vivre that take center stage from the very first lines of album opener "Put My Baby To Bed," a double entendre of parental doting and romantic desire that showcases her lyrical prowess at its finest.

"Our society is so geared towards sex and romance, but you don’t just have one kind of relationship in life," she says. "My children definitely inspired me, but there's another song on the record that's for my grandmother, for instance, and it's been really interesting for me to explore writing about different kinds of love."

Mandell hasn't forsaken the "sweetly dark" (NPR) melancholy of her earlier work,
though. "Wedding Ring" is a breezy ode to a particularly elusive accessory, while "Love Never Acted" is a wistful bit of longing for a relationship that could-have-been,
and "Something To Think About" blends the political and the personal into an anxious blend of worries. But without a doubt, the album's heart and soul are Mandell's son and daughter.  From the soulful "Little Joy" to the jazz-inflected "Like Dreamers Do," they prove a fountain of inspiration and serve as a constant reminder that life often has something far more interesting in store for us than we could ever plan.

"I went through hell to have these kids," Mandell reflects when discussing the
touching "Cool Water." "It was the hardest thing I’ve ever done. But then I realize that every failed relationship, every disappointment, every failed IVF led me to exactly where I’m supposed to be, with my two amazing, beautiful children."

Some things never change, and just like in years past, Mandell will pack up and
hit the road to tour the US and Europe in support of the album, but these days she
has a couple extra passengers. "We stop at parks and playgrounds and museums
and swimming pools," she says of touring with the twins. "It's such a cool way to
discover the United States and see different neighborhoods. We even started going to presidential libraries and museums. It's made touring more like a family vacation and less about just getting to the next city and playing the show."

So if you're headed to see Eleni live and spot a couple of kites dancing in the air above the venue, you'll know you're in the right place, and that you're in for something very special.