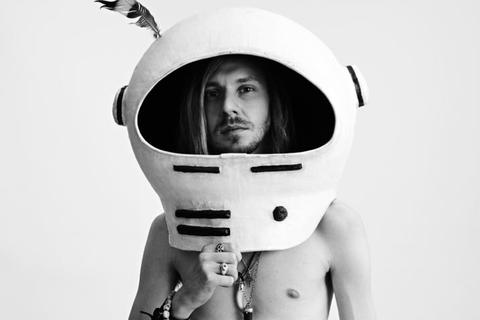 Listen to Harold Pinter is Dead

The moment that ignited the singer, the songwriter, musician and bard in Kieran Leonard was being forced by his mum to watch a David Bowie retrospective on the telly as a 13 year old kid. He wrote 100 songs in 6 months (including the Canvey Island School hits ‘Southend’s Got a Stuffed Crust of Lust’ and ‘My Gay Lamp’) the die was caste....Since that epiphany Leonard has been driving, guns blazing, eyes open, pen poised to this point.

With his debut album receiving critical acclaim and gathering an intense following, now is the moment that will undeniably propel this impassioned and
politically galvanized talent onto the global stage.

With a weird & restless childhood spent living between Ireland, the US and then London and lyrical references drawn widely from Beckett & Burroughs to Shakespeare & Marlowe, his output has much more substantial bite
and subsequent gut fill than many of his contemporaries.
“Hearing songs when I was small seemed to make things a great deal better. Songs that would strike sudden sparks and then somehow the
whole world was different after I heard them. Now, I have a few songs of my own.”

An ambition to be a change merchant rather than trigger a revolution is probably what imbues Leonard’s songs with such compelling and
provocative narratives. “However, it’s also my ambition to smoke the first Benson and Hedges on the moon”.

This ability to meld the poetic with the political in a patchwork of broad ideas is exemplified in his singles “Jerusalem” and “Harold Pinter is Dead”. Jerusalem was released in the start of 2011 and in a zeitgeist moment was adopted by the ‘Occupy’ and ‘Uncut’ movements. Speaking directly to the social unrest gripping the UK at the time. Legendary Film director Ridley Scott then picked it up as a sound track to his unique documentary “Life in a Day” exposing the song to a growing global audience. The song continued to resonate further reaching out across the internet to the ‘Arab Spring’, attracting attention as far afield as Iraq, Egypt, Turkey, USA and Russia.

More highlights included performances at Glastonbury, Reading & Leeds Festivals in the UK, and being invited to support The Libertines at their reunion concerts in London.

A man who believes in living his principles, Kieran set up in 2012 “The Chance to Fail Foundation”, created to help young people develop an understanding of the relationship between music, literature and song-writing as a tool for comment and social change, as well as what he describes as “the unbridled and sacred redemption of just singing a good song”.

After completing his European tour with Adam Green & Binki Shapiro earlier this year, Kieran has flown out to LA this Summer to record his second album at Ryan Adams’ Paxam Studios. With a sold out tour on the West Coast supporting Wolfmother, and KCRW picking up and playing Kieran’s latest single Hipster Jesus, the changing world of 2013 is about to see a lot more of the remarkable & mercurial talent of Kieran Leonard.

“Talent is rarer then Uranium; hen’s teeth territory. You have to dig for both”.