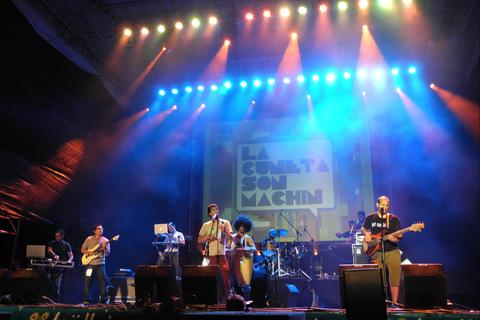 “La Cuneta Son Machín” is a group of Nicaraguan musicians that decided to come together in the year 2009 and create a band that merges Nicaraguan and Latin American popular music (son de toros, son nica, cumbia, merengue, etc) with new musical currents such as rock, funk and jazz. The creation of this musical and audiovisual project is generating an enormous impact among Nicaraguan youth.

Since August 2009, when “La Cuneta” was born on the streets of Ciudad Jardin Neighborhood in Managua, together with hundreds of street musicians that play their instruments in the Procession of Managua ´s Patron Saint, Saint Dominique of Guzman, the band travelled throughout Nicaragua, bringing joy and uproar to thousands of Nicaraguans of all social sectors. “La Cuneta” now participates in the country’s most important festivals as well as numerous solidarity, ecology and philanthropic activities.

With the years, this project continues its consolidation, always with the objective of fostering among Nicaraguan youth a much more enriching view of art, popular iconography and expressions, for decades viewed with contempt for coming from poor and indigenous social classes.

“La Cuneta” travelled several times to Costa Rica, where it participated for two consecutive years in the International Arts Festival, the most important in that country. It also toured California, USA, for two consecutive years sharing its music with the Latin communities in the area. In 2012, it visited El Salvador for the first time, and it anticipates a musical tour to the rest of the Central American countries, as well as returning to the United States of America.

Its first album “El Zafarrancho” is a success in all Nicaragua radio stations; it also sounds on the radio in other countries, as well as online radios. Currently, the band is recording its second album and its third video clip.