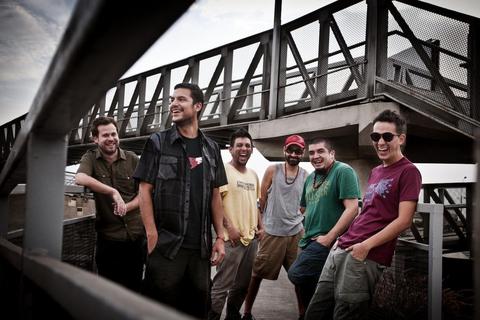 2012 Latin Grammy nominated band, Bareto, was born in 2003 as an instrumental group. In 2005, an EP called Ombligo was released. The following year Bareto released its first LP, Boleto, with original songs that combined their unique blend of Reggae and Ska with Cumbia and Latin flavors.

In 2008, Bareto released their first LP, Cumbia, a recording of instrumental covers of songs previously written and recorded by the late Juaneco y Su Combo (a Psychodelic Cumbia, Peruvian group from the 1970s.) It was Bareto’s fresh interpretations of these classic Pervusian songs that propelled the band to the top of Peru’s national Music charts.

The group toured all over Perú for the next two years. They earned a Gold Record, historically unheard of in this country where piracy is market-standard and almost no legitímate sales exist. They recieved several awards, including Best Peruvian/Fusion Album by El Comercio, the most important newspaper in the country. The band was also invited to perform in the US for the first time, their first (of three) U.S. Peruvian festival tours they have completed to date.

In 2012 Bareto released Ves Lo Que Quieres Ver (in English: “You See What You Want To See”.) This álbum positions Bareto as serious songwriters, as all ten songs recorded on the álbum were written by the group. Produced by U.S.-based producer, Manuel Garrido-Lecca, the álbum successfully mixes Cumbia, Reggae, Psychedelia and Dub together with other Latin genres. The album’s lyrics are powerful, socially aware, and speak about how people in Peru must deal with their differences (in Perú, every city is like a little country) to keep the machine going, and in a context of prosperity… referring to the macro-economic numbers of the country.

The first single off the album is called Camaleon (“Cameleon”), a song about how politicians change their positions for their convenience, regardless of what might be better for their communities. In the music video, a clown tries on a “politician’s costume” and goes to the election poll. The video was programmed in the U.S. on MTVTr3s.

Other subjects in the record are racism, social differences and street insecurity, facts that coexist in Peru’s everyday reality, but that are not easy to talk about (hence the album’s title of “You See What You Want To See”.)

The Argentinian singer and composer, Kevin Johansen, is the special guest performer where he joins Bareto on the song Matagalán, the album's second single.

2012 International tours include the U.S., Brazil, and 6 concerts in Japan.