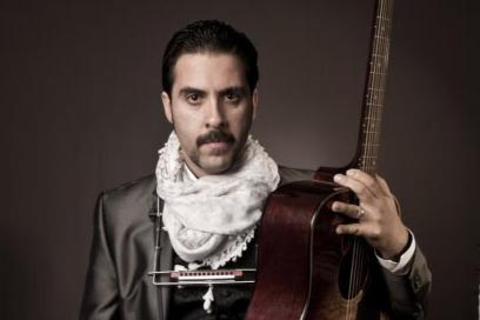 • Liber Teran is one of the most relevant mexican musician at the mexican contemporary music.

• He was the lead singer of Los de abajo with them he performed around the World playing in Europe, Japan, Australia, USA and Canada.

2012 Liber released a great 3rd album: Errante
Errante has a good welcomed and was produced by Quique Rangel from Café Tacvba.
One of its songs was the song of the week itunes with more than 25000 downloads.
The album was released in a great concert with Tonino Carotone first time in Mexico at great venue called Auditorio Plaza in Mexico City.
Liber Teran with Errante will be at Vive Latino 2013 (end of March 2013)

ERRANTE
Someone who wanders from one place to another without an address or fixed abode… a World Musician with Mexican roots… a Western Gypsy from a –his- Tambora Sound System, Liber reaches a momentary harbour and presents us with his third solo recording: Errante.

This thrilling new record was released physically by the Casete label in mid July 2010 and is available for download through iTunes. Liber presented it live on July 20, sharing the stage with Mediterranean wiseguy Tonino Carotone at the Plaza Condesa Auditorium, simply the first caravan embarked into with these 13 songs that span influences from Germanic polka to Slavic balkan to Sinaloense banda with subtle accents of Greek bouzouki, titillating Mediterranean mandolin, gypsy influenced Mexican salterio with guitar, double bass, drums, and Arabic darbouka.

Who is this wandering Errante by the singular name Liber Terán?

Errante is solidly rooted in the long phase where Liber fronted globally acclaimed World Fusion band Los De Abajo as their singer, guitarist and songwriter; a time when they flew around the globe, playing from Europe and North America to the other side of the world, while making contact with musics and musicians from distant places and assimilating local cultures that nurtured their global action with kindred sounds from all over.
At this time Líber was an actual wandering Errante throughout ten European tours, two times to Australia and New Zealand, two to Canada, and one each one to the U.S., Japan and Singapur.
Líber Terán’s musical origins begin way back in 1989 when, 15 year old, he formed his first group under the influence of the illustrious Latin examples of Radio Futura, Caifanes, Ritmo Peligroso, Botellita de Jerez, Jaime López and Rockdrigo González as well as the classic 60’s reminiscences of The Beatles, Led Zeppelin and The Doors which generated a product of its time: indie garage rock tinged with psychedelic hues.
He then joined the band Adefesio (Mess), where he experienced a progressive phase with Stridentist overtones.
In 1992 he formed Los de Abajo, a restless big band with a sharp Latin tongue influenced by the mongrel rock of Mano Negra, Maldita Vecindad and Cafe Tacvba, and they recorded five studio and one live recordings, two of them released by David Byrne’s independent label Luaka Bop, and another by Real World, Peter Gabriel’s similar enterprise.
In mid 2007 he began his present solo phase, upon which he has explored new musical terrain that spans from classic Rock & Roll to a sound inspired by North American folk music with ballad accents and Ranchero echoes inherited from Norteño music; all of it fused with Balkanic airs of Gypsy music and the concurring influences of country from both sides of the border: Monterrey’s Piporro as well as Hank Williams and Johnny Cash,The Beatles and Lou Reed,Chuck Berry, David Byrne and Goran Bregovic on an ever growing list.

Gotta keep up with this restless and energetic Errante!