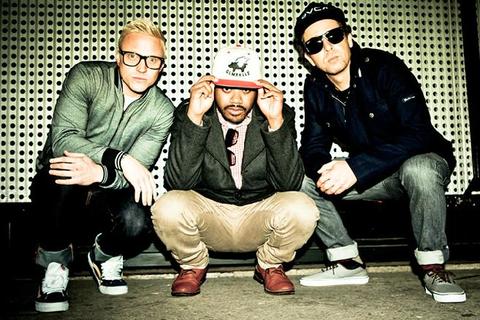 Drop City Yacht Club doesn't front. In fact, the California trio—Kristo, A Wolf, and THX—will just as quickly rap about the girl who turned them down as the one that they took home. Writing and producing all of their own music, it's that kind of dynamic underdog honesty that makes these three gents so charming. Towing the line between clever hip hop, sly pop, and a splash of sun-soaked '60s rock, the group cruises down its own lane with a wide-eyed smirk.
As a rapper, A Wolf had already been around the block, independently releasing underground favorites Nitrous Ox and Misiries Company. He wanted to flip the script though. In 2009, a mutual friend recommended that he contact Kristo for production. As soon as the two met in a Bay Area recording studio, they instantly bonded both as friends and musicians. Conversations about music quickly turned into creating their very first song, "The Freshmen", which served as an initial group name until January 2013.
As they continued collaborating, Kristo wanted to focus on rapping, and the duo decided to seek out a producer who shared their vision of "finding a middle ground between The Beastie Boys and The Beach Boys", as A Wolf eloquently puts it. By chance, some of THX's beats were piping through the speakers of an adjacent studio one night, and they knew he was the guy. The Los Angeles-based producer, whose credits include songs for Snoop Dogg, David Banner, Erykah Badu, and E-40, flew up to meet the boys, and they started cutting tracks immediately.
"We're all madmen in our own way," smiles Kristo. "We don't approach these tracks like typical rap records. We're trying to write songs and break rules. We want to shake some shit up. There aren't any boundaries."
"We're all from Cali so it was easy to click," adds THX. "It always felt like it was meant to be because we were all on the same page about doing something fresh from day one."
Releasing music online, they began turning heads from the backpackers to the tastemakers. Their 2011 cut "Hello There" ended up serving as the soundtrack a trailer for the Kevin Hart blockbuster Think Like a Man, while the raw, raunchy, and raucous rapping of "Surf's Up" and "The Fonz" showed the group's dynamics. The first single "Crickets" made it into the hands of Danny "C" Coniglio at Exit 8 Media Group. Immediately excited by the track, he brought it to A&M/Octone, and they decided to release Drop City Yacht Club's music via a joint partnership Exit 8/A&M/Octone.
"Crickets" slides from a Motown-style beat and piano buildup into a sharp little story of getting shut down by the fairer sex. Of course, cricket sounds also chirp in the background as the falsetto hook resounds.
"The idea was to tell the truth," affirms A Wolf. "In so much hip hop, everybody's in the club throwing around hundreds of thousands of dollars they don't have and driving cars they don't own. Hitting on a chick at a party who doesn't want to talk to you is a real experience. We've gone through it enough!"
Kristo elaborates, "There's a self-deprecating undertone, and it represents who we are as characters. We take our music seriously, but we have no problem making fun of ourselves either."

Their moniker reflects the diversity you'll hear on tape. "Drop City is an old hippie community," explains A Wolf. "We're super zany, artsy and left of everything going on right now. You don't expect us to do what we do so we felt like that part of the name fit us perfectly. Then, you've got the yacht club or the establishment. It plays on opposing ends of the spectrum. You wouldn't find a yacht club in Drop City. We basically go to yacht clubs and get crazy."
Drop City Yacht Club stands out because it can't simply be boxed into one sound or style, yet the music is still so damn catchy. Boasting airtight mic skills and undeniable production, it's a one-two punch that's going to knock listeners out and get bodies moving in the process.
"So much music is made for today," THX goes on. "We want to be remembered for crafting great songs that were popular rather than just pop songs."
"If you can be the soundtrack to someone's life, that's the highest props you can get," A Wolf concludes. "So many artists shaped my life. If we can give people an experience that they hold on to, we're doing something right."
— Rick Florino