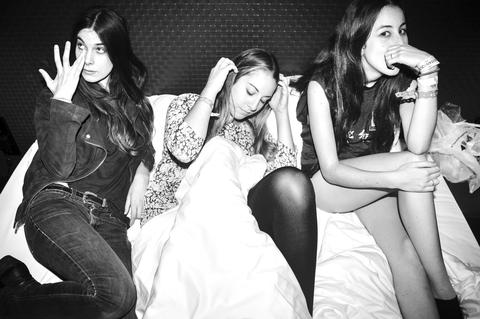 BIOGRAPHY: HAIM
Hailing from the San Fernando Valley, HAIM consists of, “Three sisters, and a mister” that has been shaking things up in the city of Los Angeles for the past four years. It is truly a family affair for the band which prides themselves on being able to switch from instrument to instrument with complete confidence and ease, and all while singing in three part harmony.
The sisters, Este, Danielle, and Alana, grew up playing classic rock songs with their parents in a family band, called “Rockinhaim,” which played for charity events and street fairs. After years of playing with their parents, the girls decided to strike out on their own, and began writing their own material. Este, the eldest of the three, plays bass guitar and found time in between touring to graduate from UCLA with a degree in Music. Danielle, the 23 year old lead guitar player, who previously toured with Jenny Lewis, Cee-lo Green, and Julian Casablancas. Alana, the youngest in the band, plays rhythm guitar, keyboard, and percussion. Rounding out the group is Dash Hutton, who previously played drums for LA bands Wires on Fire and Slang Chickens.

In February 2012, HAIM released a three song EP titled Forever followed by their second EP in December 2012 titled “Don’t Save Me.”
Following dates supporting Mumford & Sons on their “Gentlemen of the Road” tour in the US in August 2012 HAIM made their debut tour of the UK in November 2012 and then supported Florence and the Machine on their UK and Ireland tour in December 2012.
HAIM are signed to Columbia Records for the US and Polydor Records for the UK. They are currently recording their debut album due out Spring 2013.