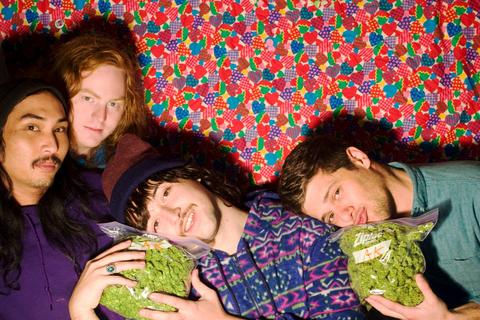 The Memories are four (4) lovey dovey stoner sweeties. Formed in the summer time 2010 by Rikky Gage and Kyle Handley of infamous party nomads White Fang. After releasing and selling all 200 copies of the first edition of their self-titled cassette on Rikky's Portland, Oregon based label Gnar Tapes, the album was pressed to LP and officially released by Underwater Peoples in NY. In October 2012 they completed a month long tour of the US, promoting a second album called "Love Is The Law" on Burger Records. The limited cassette run sold out almost instantly, with an LP pressing by Burger to be released in May 2013. The Memories recently released a cassette EP titled "Rainy Day", also on Burger, and will be touring with the Burger Caravan to SXSW, as well as playing night two (2) of Burger's second (2nd) Burgerama festival, alongside Ariel Pink's Haunted Graffiti, White Fence King Tuff, and many more. The Memories songs of stoner romance, love bliss, deep sex, and burner wisdom will be left in your head like bong resin, forever.
Sent at 11:59 AM on Thursday