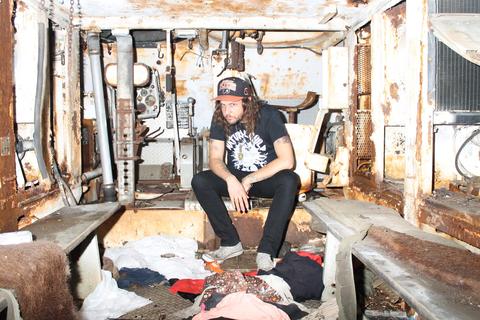 A more charismatic, enigmatic nomad of a furioso frontman/artist/guitar legend could not be imagined. You can’t make this shit up.

Grinning gold teeth behind blonde shades, in black, skeletal denim, with a studded “KING TUFF” across the shoulders where feral locks fall around his infamous “Sun Medallion.” With an acoustic guitar slung over the shoulder, King Tuff slinks through the abandoned halls of Detroit’s Malcolm X Academy. His baseball hat reads “VERMONT.” It’s the 4th of July.

Will somebody please snap a photo of this animal before it escapes back into the wilderness from which it came??!!

Magic Jake pulls up on a motorcycle, riding left-handed with his bass guitar hanging from the right arm, shoeless.

Kenny arrives in a rusted van, drums stacked in the back atop a shedding sofa complete with coffee table and a thermos full of god knows what.

Captain Cox, prodigy engineer, is attempting to “fix” the mixing console, on his back, under the wires, a flashlight between his teeth and soldering gun in hand.

“Just trying to get these channels to work,” he laments.

“What’s wrong with them?” I lean under the desk and practically fall into a pile of live spaghetti.

“I built them,” he confesses.

Silent on a marble staircase, a ghost of a child, King Tuff, expressionless, leans back into a half shadow, with rays of silver rings leaping under incandescent light. The sessions go long into the bordering hours of morning.

Never a dull moment. King Tuff exclaims, “I’m an expert on the vibraphone.” I laugh, and then he performs one, perfect take. Seriously.

My familiarity with Was Dead, his last release, was limited. Under the avalanche of thirty-something demos, I’d selected 16 to record for his Sub Pop debut.

After investigating Was Dead I realized that, with his latest offering, his songwriting was stretching far beyond the thrill of the immediate dance-floor reflex and now revealed a songwriter with a keen eye inside everyone. That was the stuff that I was interested in. Embarrass me! I don’t give a fuck about your ex-girlfriend.

King Tuff: “You always want to erase the imperfect in your beautiful face, and you think about the time you waste in this impossible place.”

“Loop those fucking beats, Kenny!” was my mantra. I shout at the session! Millions of albums arrive daily, yet for Tuff, this is the only one. And I understand that perfectly.

King Tuff sang 16 songs in two days. We chant: “Nobody gives a shit!” This is not precious, it’s priceless—ART. Make it, don’t molest it.

But how? More frustration! More saturation! More immediacy! Filthier! Frighten me! Shake it ‘til you break it! It’s a perversion of a language that sounds like Rock & Roll. But new, again.

An artist should never be careful, nor should the audience covet. Take the shot! Embrace the imperfection. Create more music, carelessly.

We’ve created something here. King Tuff:http://www.subpop.com/releases/king_tuff/full_lengths/king_tuff should not be inspected or even listened to with critical ears. Cut your ears off. Rock & Roll is meant to be blasted into your cells, penetrated, and absorbed. It’s a visceral experience.

Seek solace in solitude when you’re dead. If you aren’t able to recognize the genius in this epic album, then you’re already dead. Kill yourself. Or get a job.

Stop here. Don’t pay attention. Blast it! It’s not precious; it’s real. It belongs to you. Do what thou wilt. It’s yours.

All that aside, this album fucking rules. I should know, I’ve heard it about a million times.