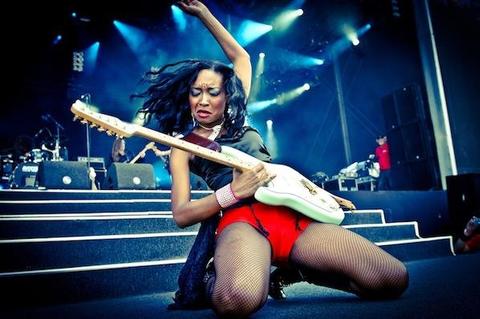 Malina Moye
Flipping a Fender Stratocaster upside-down, acclaimed singer/songwriter/lefty guitarist Malina Moye fills a void in the entertainment industry. Described as a modern day renaissance woman, she’s a quadruple threat, carving out her own lane in today’s music scene as one of the few artists in history able to straddle both Rock and Soul genres. Moye’s musical narrative boasts an impressive resume that includes making history as the first African-American woman to play the National Anthem on guitar at a professional sporting event, all the way to performing at the Rock & Roll Hall of Fame tribute concert for music pioneer Chuck Berry. And recently, Malina was praised by Jet Magazine as “the highlight of the evening” after she headlined the largest peace concert on the west coast with Chaka Khan honoring the legendary humanitarian Stevie Wonder.

With an electrifying stage show, Malina delivers an intoxicating fusion of funk, and Rock. Her critically acclaimed LP “Diamonds & Guitars” reached number 35 on Amazon.com and iTunes respectively and a number 50 slot on the Billboard album charts, showcasing an eclectic pallet of music while preserving its mainstream appeal. Abroad and stateside, Moye’s Diamond & Guitars tour served her as an opening act with Robin Thicke, and legendary rock group Journey.
A pioneer among the new generation of lead guitarists, Malina is the first left-handed female player to be included on the legendary Fender Guitars’ impressive roster of endorsees, and to also join the critically acclaimed 2012 Experience Hendrix tour. Furthermore, the songstress was featured in the UK documentary “Stratmaster: The Greatest Guitar Story Ever Told,” and Guitar World Magazine dubbed Malina the “female Jimi Hendrix” and “one of the top 10 female guitarists to know.” UK’s Blues and Soul Magazine touted Malina as having “…all the ingredients to shake the modern soul room.“ In addition to being on Sony’s writing team, Moye independently released her first R&B single “Girlfriend” through her WCE Records to great reviews and a number 43 slot on the R&B/Hip-Hop Billboard chart. Then Malina followed-up with her second single “Alone,” which remained on the charts for 32 consecutive weeks. “Alone” peaked at no 9 on the Billboard R&B/Hip-Hop charts and at number 27 on the hot 100. Rolling stone, Billboard Magazine and some of music’s hottest names have raved that Malina is “a ground-breaking artist who makes indelible impression.” Malina’s humanitarian efforts include serving as ambassador for HRH Prince Charles’ Prince’s Trust for which she donated her single “Hustler’s Blues” to the Wilberforce 200 compilation CD. The record was one of the fastest selling soul CD’s on iTunes UK with all proceeds going to the Trust and UNICEF. Cover girl Malina Moye continues to build a brand name globally, appearing in campaigns like Victoria Secret’s “Love Rocks” and shoe chain Steve Madden’s Music amongst other retail powerhouses.
Malina is currently finishing her new record entitled Rock ‘N Roll Baby slated for a first quarter release. For more information, visit www.malinamoye.com.