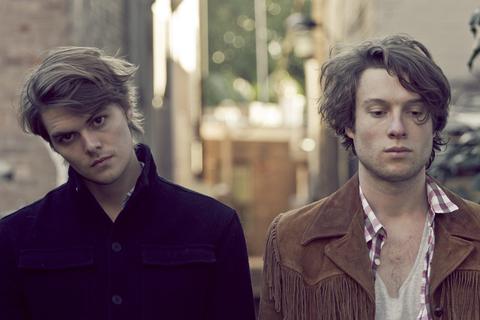 Playing music together since they were teenagers living on Sydney’s North Shore banging out Nirvana covers. “We were young kids letting out a bit of rage,” Ben laughs. Soon they both found themselves leaning towards acoustic guitars and embracing the singer/songwriter tradition.
Jordan Wilson and Ben Riley, friends and collaborators say from the early stages they focused on the value of the song and the shape of their sound. When not playing and writing, they raided their father's album collections for inspiration and direction, drawing on the likes of Crosby, Stills, Nash & Young and Bob Dylan.

The pair has grown together in friendship and music, making their acclaimed debut album, All Through Winter in North Carolina with producer, Bill Reynolds, of the highly respected Band Of Horses. For Reynolds, the appeal of working with the talented newcomers was impossible to resist. “It’s once in a blue moon that I come across a group with such great harmonies and great songs,” he attests.

Ben & Jordan invited Sophia Felton to become part of Georgia Fair adding a new dimension to the sound with her undeniable attitude and approach from behind the drums.

So, they hit the road for the next 18 months touring with Howling Bells, The Panics, Lisa Mitchell, and The Tea Party, experimenting and honing their sound, whilst developing their stagecraft as a band & testing out songs from their yet to be released second album to their growing audiences.

Their second album was recorded in Los Angeles with Ted Hutt (Drop Kick Murphy’s / Gas Light Anthem) at the temple of Rock Music greats, East West Studios on Sunset Blvd. The new album is a big step forward with a bigger, edgier sound, at times soothed by Jordan’s vocals, other times urgent and driven by soaring guitars from Ben and the pulsing rhythm from Sophia.

The story continues for Georgia Fair – coming to stage near you soon..