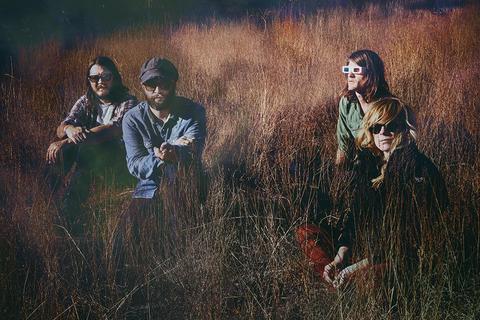 Blue Horizon recording group The Black Angels have announced the upcoming release of their eagerly anticipated new album. Indigo Meadow will arrive in stores and online on April 2nd.

Indigo Meadow is heralded by the high-powered “Don’t Play With Guns.” Penned just days before last year’s mass shooting in Aurora, Colorado, the song is streaming now exclusively via The Black Angels’ newly relented www.theblackangels.com. In addition, the “Don’t Play With Guns” companion video clip can be viewed at the band’s’ visionary YouTube channel, The Black Angels TV, located at: www.youtube.com/embed/RoNB1NW2u0A.

“Our music has always tried to shed light on issues that may be hard to deal with or confront,” says singer/multi-instrumentalist Alex Maas. “If people think they can ignore the issues they are wrong. Don't play with guns, don't touch a hot stove, don't give your child a poisonous snake, don't turn the cheek when artists are willing to discuss these issues.

The Black Angels’ most revelatory collection thus far, Indigo Meadow marks the Austin, Texas-based band’s fourth full-length release, following 2010’s acclaimed Phosphene Dream. Once again The Black Angels prove themselves the undisputed avatars of contemporary psychedelic rock, simultaneously exalting the genre’s kaleidoscopic past as they thrust it further into the future. Now a four-piece – ably supported behind the board by producer/mixer John Congleton (David Byrne & St. Vincent, Explosions In The Sky, Clinic) – the band have brought new focus to their wide-ranging songcraft, the righteous riffs and dogmatic drones gaining increased power as they fuel a more expansive emotional terrain. The ominous organ grooves and carpet-bombing beats surely resonate with blood and fire, but songs like “Love Me Forever” and the deep blue title track also see a little light entering the Black Angels’ notorious heart of darkness. A 21st century trip as transcendent as any in the canon, Indigo Meadow masterfully affirms the Black Angels’ full-throttle commitment to the psychedelic ethos of creativity, community and boundless experimentation.

Founded in 2004, The Black Angels have been at the spearhead of the post-millennial psychedelic movement, picking up the mantle of their hometown’s long lysergic history and reinvigorating it with progressive political commentary and unrestrained creativity and ambition. Long hailed for their monumental live sets, The Black Angels will celebrate the arrival of Indigo Meadow with a major North American tour, set to get underway April 4th at Athens, GA’s Georgia Theatre and then continue a May 26th date at San Antonio, TX’s appropriately named White Rabbit. Support comes from a stellar line-up of lysergically like-minded artists, including Allah-Las, Elephant Stone, Hanni El Khatib, and Wall of Death (see attached itinerary). Tickets will go on sale this Friday, January 25th – please see www.theblackangels.com for more information.

Further, The Black Angels will once again have a headline role at their own annual Austin Psych Fest, set for April 26th – 28th. Early Bird Weekend Passes are on sale now – please see www.austinpsychfest.com for details.

As it enters its sixth year, Austin Psych Fest has proven the locus for today’s incredibly wide-ranging psychedelic scene, as expansive and revolutionary and exhilarating now as at any moment since its 1960s zenith. APF has quickly become no less an institution as the Newport Folk Festival or the New Orleans Jazz & Heritage Festival, inspiring – as it was itself inspired – numerous other like-minded gatherings in such far-flung locales as Liverpool, Santiago, and Cape Town. Like ever before, psychedelia’s countless creative tendrils lead back to Austin, where in 1966, the 13th Floor Elevators were praised for their “psychedelic rock,” forever marking the city as the forward-thinking sound-and-vision’s official birthplace.