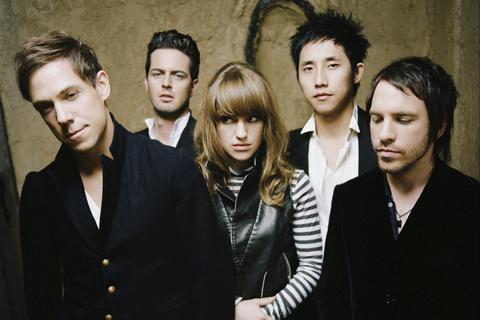 “When I write a song,” says Mikel Jollett, co-founder and creative driver of the Californian five-piece The Airborne Toxic Event, “I’m trying to get down an emotion, a scene or a setting. Everything important that happens after that happens between the music and the listener; the rest of it is all mythology. The collective interpretation of it is way more important than what I think.”

There’s no reason to doubt the truth of that statement. Except that Jollett does do a lot of thinking (or over-thinking, as he himself would put it), and what he does, the way he spends his days, matters to him deeply. Besides, he’s had a lot to think about in the two years since the band’s debut album ambushed and enraptured fans with its captivating blend of literate, visceral indie rock and propulsive, anthemic choruses. That self-titled album which topped Billboard’s Heatseeker Chart for an astounding 8 weeks, found Jollett addressing the break-up of a relationship with a candour that was sometimes uncomfortable but always compelling. Two years on, Jollett’s priorities have shifted. On TATE’s stunning new album, All at Once, he and the band have a new urgency, a tighter cohesion and a fearlessness that is thrilling. Mortality, loss, the battle between the comfort of complacency and the need for change, the issues – both personal and political – that continue to draw individuals and nations into conflict the world over: these are big subjects, but Jollett doesn’t just dip his toe in the water. He dives right in.

“The album is basically a series of questions,” he explains, “which it sets out to answer. And the biggest is, ‘How do I spend my time? How do I live my life?’.” The death of three of Jollett’s grandparents while he was absent owing to touring commitments was the catalyst for this self-examination. “The first [title] track is basically saying: okay, this is how it goes – you’re born like this, you live like this; what are you going to do with that?”. He is not, he says, disowning the sentiments he expressed and the heartache he addressed on the first record. It’s more that, having been given such a sharp and painful reminder of the passing of time and the never-ending duality of life and death, he resolved to dig a little deeper than he had before, and look those conundrums straight in the eye. “My grandparents’ deaths changed a lot of what I thought about what was going on in my life. Seen from a longer view, things like breaking up with a girlfriend, you do suddenly go, ‘Okay, that’s part of life, kiddo’. It happens to people. And death, too; yes, it’s tragic, but it’s also just part of it. My father’s mum was 97 and she died in her bed, in a house filled with people who loved her. All those questions the record asks – at the end, the only answer I could come up with was, ‘It’s probably a good idea to love other people’.”

Not every protagonist among the 11 new tracks is getting this message. Sequenced alongside one another, the album’s two overtly and uncompromisingly political songs feature human beings either impervious to the fate of others, or caught up in arguments they have nothing to do with, but which make them victims nonetheless. The angry, rousing The Kids Are Ready to Die is, says Jollett, about the idea of “not being willing to die for a cause but sending someone else to do so; and how that disrespect for other people’s lives is going to be visited back on you. That a lie can only exist as a lie for so long, and will eventually become known – which is a terrifying idea for governments, but for people, too.” Welcome to Your Wedding Day, meanwhile, was inspired by the death in Aghanistan of a wedding party, mistakenly attacked by an American Predator drone. “I’m sure,” Jollett continues, “that the people who dropped the bombs in error feel terrible about that. But the idea that you can win hearts and minds with something so horrific, dominate them with fear, is insane. How are you going to change anyone’s mind if you kill people?”

Death doesn’t stalk All at Once (it’s ultimately too joyous a record for that), but it is a theme, an inevitability, that keeps asserting itself. “I think that moment when you realise you will one day is probably the most important day of your life,” says Jollett. “You can react to that realisation by falling into nihilism or hedonism, or religion – which I think is just another form of hedonism, where people try to salve their wounds. Or you can decide to get on with it.”

Jollett’s upbringing – raised on a commune in California, the son of two hippie parents – ensured that he was never likely to find the mainstream and the humdrum a happy place to be. “My folks were really cool with us; there was a lot of love in the house. A lot of those accoutrements that come from growing up in a middle-class household, I don’t feel burdened with. And that seems like a gift, a freedom to do whatever I want.”

He looks back at his early attempts at being a novelist with wry amusement – though the habits Jollett formed then, of endlessly collecting information, squirreling thoughts and ideas away, tacking ideas to the wall, refining them, obsessing over them, have never left him. The very same obsessiveness and attention to detail characterised the genesis of All at Once. As did the restlessness that first drove Jollett to quit his office job and head into the desert to work on a ranch. “I just knew I had to get the fuck out of that fluorescent-lit, corporate horseshit,” he laughs. “I made the decision that I would rather be homeless than do that anymore. I started reading constantly. I felt like I’d never really had an education, not a standard one anyway, so I’d be shovelling horse manure all day, and then at night I’d work on my novel – which was, to be honest, another form of shovelling horse manure.”

Ask Jollett where the songs were at this point, and if, unbidden, they were forming inside him as he shovelled, and he pauses. His answer, when it eventually comes, is instructive, because it captures the often contradictory forces that compel him to write. On the one hand, he is refreshingly unstuffy about the whole process of making music; on the other, he takes what he does very seriously indeed. “I never messed about,” he says, “trying to learn the riffs to classic songs. I wrote my first song the first day I learnt a chord. At the same time, I worshipped bands like The Cure and The Smiths. My friend Jake was like the mythical older brother, steering me towards things, you know, ‘Check out Josef K’, or, ‘Try The Velvet Underground’. And it would blow your fucking mind. It made us feel very specifically how we wanted to feel, like these sophisticated outcasts. You know, ‘We too like to quote Oscar Wilde’.”

The current US hit single, Changing, may be a good-time, old-school barroom rollick, but its lyrics delve deeper. “With the massive life changes we’ve gone through in the past couple of years, all five of us, there are suddenly all these people wanting you to do this or do that, be this way, be that way, and it screws with your head. So there’s a little bit of like, ‘Can we please just do what we set out to do?’. I don’t want us to be some precious little indie-rock band; but nor do I want to pretend I’m in some reverb-soaked fucking post-punk act where I have to act like I never smile and stay up late drinking absinthe in my attic, dripping candle wax on my skin.” Jollett breaks off to laugh darkly. “I mean, I want to do music because I want to do music, right? We all do. Because we like to jump around and play songs.”

Musically, All at Once is a call to arms to anyone who loves music that is unashamedly wide-screen and prepared to lay its heart on the line. This is not an album that has gone through any focus-group editing or add-water diluting: it is raw, ragged, passionate. The chattering guitar and mournful organ that open the title track; the sparse, finger-picked, piano-pocked beauty of All For a Woman; the bizarre blend of electronica and accordion on Welcome to Your Wedding Day, and the menacing, insistent synthesizer on its chorus; the spiky, propulsive indie-rock of the Cure-referencing Strange Girl; the strings, sawing and swirling, on the epic, arguably TATE-defining All I Ever Wanted; the breakneck rockabilly of It Doesn’t Mean a Thing; the ghostly piano on the closing The Graveyard Near the House: All at Once’s soundscapes are both accessibly immediate and hauntingly complex. Lyrically, too, the album nails its concepts to the mast. Phrases leap out, lodge in your head: the bereaved, confused narrator of the title track, “swearing at the sky”; the reminder that all us will “leave the way you came – without anything” on It Doesn’t Mean a Thing; Ready to Die’s poignant, powerful “I was just 13 when I got my first taste of danger, standing by the church, I had a bottle and a pen in my hand”; Graveyard’s epilogue, both forlorn and redemptive, as Jollett confesses, “I can list each crippling fear, like I’m reading from a will”, and pictures a “dark and lonely plot under a bough”.

Talking to Jollett, listening to All at Once, you sense that this is the record he was always meant to make. Loss inspired it, but writing and making it proved celebratory and revelatory. The unifying theme, Jollett says, was “the idea that life happens on many levels; that you don’t really live inside of evolving events, but in the sort of quiet, moribund moments in between the massive moments of change. And that change happens suddenly and all at once – and that that is true on a personal level, on a cultural level, on a political level”. These are big themes. On All at Once, Mikel Jollett, Stephen Chen, Noah Harmon, Anna Bulbrook and Daren Taylor look them squarely, fearlessly, in the eye, grapple with them, wrestle them to the floor. “We had this sense,” Jollett concludes, “where we knew that people were going to hear this record, and we didn’t have that with our first one. You sort of have this moment where the world is there and you have this opportunity to say something.” The Airborne Toxic Event have taken that opportunity, and risen to that challenge. Now it’s over to us.