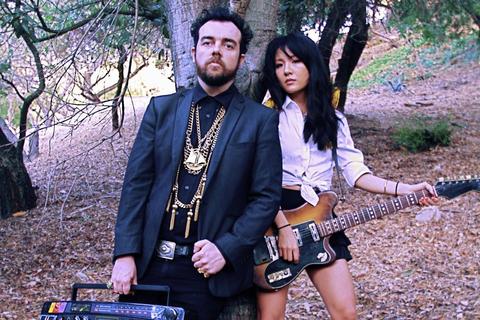 Hailing from Sydney, Australia, but now based in the US, Andy Clockwise has become one of the most compelling artists in music today. His most recent release, 2011’s The Socialite, propelled him to a new level of success in the United States and Australia. After touring both US coasts and playing music festivals nationwide, Clockwise now has his sights set on his follow-up LP, entitled War Stories.

What you find in Andy Clockwise is a new kind of artist: unrelenting, prolific, exciting and independent.

Andy’s first taste of success came in Australia with his debut double-album Classic FM, released through Universal in 2006. Critics called the album “thrilling”, “ambitious,” and “unpredictable.” Its success eventually landed him sold out headlining tours across Australia, as well as support slots with INXS, The Black Keys, Wolfmother, The Wailers, and Hugh Cornwell of The Stranglers.

After a short stint in London, Clockwise settled into his new Los Angeles home. He became immersed in the eclectic music scene that is Los Angeles. His success Down Under translated in the United States almost immediately, as he released a string of successful EPs prior to the release of his second LP The Socialite. His Are You Well? EP and The Socialite peaked at number 6 on the FMQB specialty charts and was a favorite among college and AAA radio stations across the country. All of this exposure led Andy to an opening slot for Strokes front man Julian Casablancas on his first solo tour.

After critical acclaim upon its release in Australia, The Socialite dropped in the U.S. in April 2011. As he does on all his releases, Andy performed, recorded, produced, and mixed the record by himself. “It’s about me trying to find some sort of state of grace in the cult of celebrity,” says Clockwise.

In support of The Socialite, Clockwise toured the US extensively for the first time, hitting both coasts and several festivals throughout the country, including his third SXSW. Los Angeles’ famed rock radio station KROQ-FM was very supportive of the album with steady airplay and sponsored live shows, all garnering overwhelmingly positive reviews. He sold out several iconic Los Angeles venues including The Satellite (Spaceland), Hotel Cafe, and The Troubadour.

Leading up to the release of War Stories, Andy released its first single entitled “Steam Dream” in June of 2012. The song has entered regular rotation on 98.7FM and KCRW in Los Angeles. 98.7 sponsored a wildly successful show of Andy’s at the Viper Room and has promoted the single with on-air interviews and an upcoming co-hosting appearance on the station’s “Close to Home” show.

In November of 2012, KROQ.com teamed up with Andy for an exclusive premiere of his new music video for “Steam Dream”.

The Andy Clockwise brand of “schizo pop” is assuredly on display on his forthcoming album War Stories. The album, darker and more refined, digs deeper than any of his releases to date; Clockwise describes it as an album about “the wars we put each other through…a electro-folk-pop musical ode to dysfunctionality. It’s about us all being honest and full of s#*t at the same time”. War Stories is slated for release in 2013. The first single “Steam Dream” is available now.