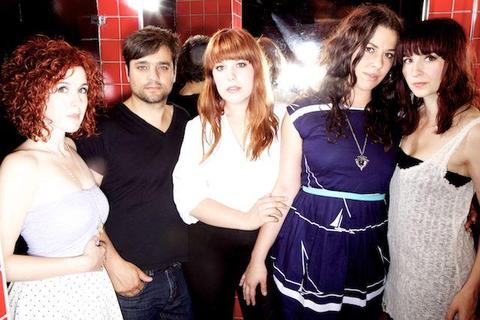 Winsome, wicked and witty, Chic Gamine embody the ‘60s girl-group vibe all grown up and living in a new century. Wall-of-sound harmonies, hip-shaking beats – these women could be straight out of Motown, before you throw in the curveball of French pop and four rotating lead-singers. By all the laws of the music business, this group is like the unicorn – it probably shouldn’t exist, let alone be performing at the Olympics and winning Juno Awards. And yet, here they are, soon to release their official U.S. debut, a group singing soulful, captivating four-part songs that artfully span the musical map.

Chic Gamine’s musical relationship has been fruitful from the start; a demo flowed effortlessly from their first recording outing in 2007. Then came a score of performances across North America where audiences went wild. Highlights include opening for Motown great, Smokey Robinson, and playing in a lineup featuring the legendary Mavis Staples - who ended up revealing to the awestruck band-mates that they reminded her of her family, the Staple Singers. In 2008 came their self-titled Canadian debut, which went
on to win a Juno Award for Best Roots Album of 2009. Chic Gamine has since been a regular feature on critics’ best-of lists, won a coveted spot on Radio-Canada/Espace Musique’s Musical Revelations of 2009/2010, and enticed the world to fall in love with their performances at the 2010 Vancouver Olympic Games. Also in 2010, they tucked their sophomore Canadian release under their belts, and were rewarded with a second
Juno nomination, also for Roots Album of the Year. 2011 was spent touring intensely, playing U.S. and Canadian music festivals as well as a 6 month, coast to coast tour with Marc Broussard. Up next, their long-awaited first official release in the United States, due
out in early 2013.

Chic Gamine (which translates roughly as stylish mischievous young thing - let’s face it, the French say these things so much better) will tease and tempt you with a nostalgia inspired, fresh new sound – the mix is indescribable, but unbearably tasty. Do you believe in Chic Gamine? You’d be a fool not to.