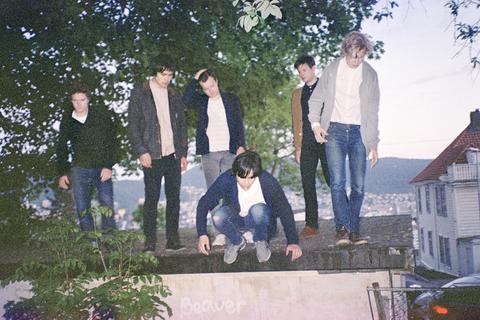 Having a vision, getting it done.

Like a wildflower of positive energy spreading its seed through song, Bergen collective Young Dreams are coming for the head and the heart. An album of stirring, symphonic wonder, Between Places is Young Dreams’ first cultivation of a rich patch of sonic earth, to be released in March 2013.

Beyond this core though, which originally began as all great rock’n’roll stories do, through frequenting the same bar (Bergen dive Vamoose in this case), the Young Dreams act swells to as many as the budget will allow, with a clutch of close friends contributing lyrics, vocals and instrumentation both in the studio and on the road. In a way it’s a very modular act (no pun intended), with each member having at least one other project, and often more than one member playing in another members other projects, and so on and so forth.

The genesis for this project though occurred in 2009, when Tellez decided to go about building a studio, where “ instead of spending our money renting studios we would spend the money on building one and give people without much money the opportunity to record their songs without having to get broke. We bought some equipment with the little money we had left and Erlend Øye (K.O.C/TWBA) donated a mixer and a computer”. With likeminded dreamers regularly stopping by to use the studio, Tellez made the decision to move beyond his up-until-then mostly solo work, and make use of the people that surrounded him to bring his ambitious pop prophecies to life.

I asked Rune if he wanted to sing on a new track I had been working on called "Young 1", later known as "Flight 376". I asked one of the bar owners, a Welsh guy called David, if he wanted to help me out on the lyrics so David, Rune and I sat down and wrote the words. We recorded the vocals and the word got around and people got to hear it. More people got keen on contributing so when I had laid down the music tracks people came by the studio to record their vocal parts.
Gradually the foundations of Young Dreams were laid, and the result is Between Places - a vast, deep dive into symphonic pop, borrowing from classical composition as much as classic 60’s pop as much as textural electronic experimentation. Dense, darting arrangements are utilized to convey the most plaintive, honest of emotions, and on the contrary, sparse simplistic melodies carry the weighty feelings of young love and uncertain futures. Overall it’s a joyous uplifting celebration of youthful song, and at the same time as grandiose as debut records tend to get.
“The vision was just to compose and record beautiful and honest music. It was kind of a reaction to all the superficial music with the wrong intentions being played around. It kind of hurt. It's like watching some one being beat and not doing anything about it, that’s just wrong. So I looked back at what I wanted to do when I was a kid, what other people wanted to do when they were kids.”

Songs start in unexpected places, and end up even further off the beaten track. ‘Footprints’ is an invigorating splash of vocal harmony and percussive energy, while ‘Fog Of War’ is the heavenly first single, a burst of sweet strings driven by trance-like synthesizers. On ‘Wounded Hearts’ you find an attempt to literally capture the feeling of a dream in song form, as arranged in the style of Gil Evans’ work with Miles Davis in ‘Wounded Hearts Forever’. There’s a choral introduction based on Mozart’s requiem on ‘Through The Turnstiles’, and a “Steve Reich/John Williams-ish” orchestral house track in album centerpiece ‘The Girl That Taught Me How To Drink And Fight’. It could all very easily come across as overwrought, indie pretentiousness if it weren’t for the abundance of pure unfettered feeling at every trick and turn.

“It's about documenting and capturing the sound of people trying the best they can. And that's maybe one of the most beautiful things in the world.”

When it came time to mix, Matias’ brain was understandably fried, and so UK sound architect Gareth Jones (Grizzly Bear, Mogwai, Liars) took a trip to Bergen to put the beast to bed, bringing 20 odd years of mix experience with him, and finding sweet spots that until then only existed in Matias’ head.

And so we have Between Places, the debut record from Young Dreams. For your enjoyment.

Presented by: The Lexington