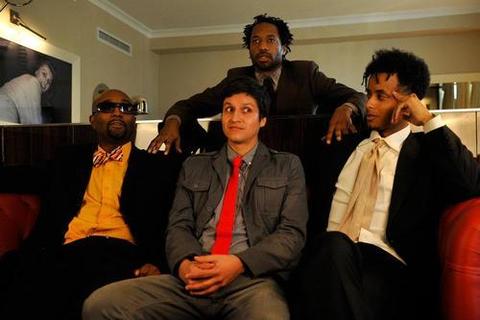 While pioneering the genre of ballroom rock, the band has continually won fans over with their emotionally-driven yet upbeat songs that playfully strike a balance between the alternative and organic. With a revitalized sense of vibrance and a newly recorded LP on the horizon this spring, it’s not hard to see why the band is so optimistic about the next chapter of its career.

After touring again nationally during the fall-winter, Blah Blah Blah headed to Los Angeles again in February during Grammy weekend for Pre-Grammy events hosted by Garth Trinidad (KCRW) and Moja Moja playing alongside DAM-Funk, Goapelle, Los Amigos Invisibles, Mariachi el Bronx, Sonos. Blah Blah Blah has played many sell out shows in Chicago and has won over audiences opening for a diverse list of acts including Theophilus London, Devotchka, RJD2, JC Brooks and the Uptown Sound to name a few.

We are looking to spread love. Wish us luck.

The show at BD Riley's on Tuesday, March 12