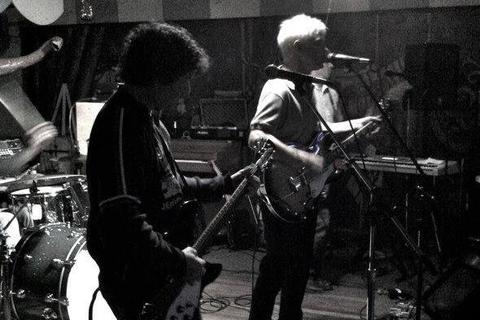 Listen to You Come Around

The Rite Flyers, from Austin Texas practice several styles all loosely orbiting the same power-pop nucleus: snappy electric rockers, plaintive acoustic odes and fuzz-clouded squalls. Songs that positively vibrate with the sort of chipper melodic energy that suggests they could crank out a hummable tune or three before their second cup of morning coffee.

The Rite Flyers placed “Suffer Fools Gladly” on the ABC show CUPID and had two songs, “I’m in a Way” and “Liars Club Cathederal” featured in episodes of VERONICA MARS on the UPN Network. Their song “Me and the Bean” was covered released by Spoon on their indie break through GIRLS CAN TELL (Merge Records, 1998) and is featured in the video game ROCKSMITH (Ubisoft 2011).

“It’s that point where many different Americana influences merge, with just a pinch of country, and a third element of submerged spirituality that’s hard to define… Although there’s still a tinge of Texas twang in the vocals, songs such as the aggressive “Jill Stood Still” and “Politics of Misery” and “I Want To Tell You How I Feel” show a band more in line with where a garagey Guided By Voices meets the early Who and Beatles.”
–Jack Rabid, THE BIG TAKEOVER

The show at BD Riley's on Tuesday, March 12