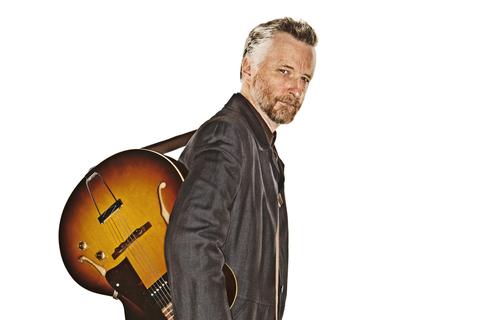 It was thirty years ago today when the Saturday boy from Essex who would become Britain’s foremost political singer-songwriter released his first record, the mini-album Life’s a Riot With Spy Vs Spy. It contained seven songs, honed live and bashed out over three days on a punk rock electric guitar, and its utilitarian, single-colour sleeve bore the following legend: ‘Pay no more than £2.99.’ In the same week, you could buy the new album by Big Country or Paul Young for £3.99, and many punters did. But, after famously bribing John Peel to play a track on Radio 1 by hand-delivering a mushroom biryani to reception (Peel vouched that he was going to play it anyway), Life’s A Riot charted at number 30 in the national charts. Billy Bragg had arrived. He was in reception. His record company biog stated that he had ‘risen from obscurity to semi-obscurity.’ And he was already a thorn in the industry’s side.

Politicised by a Tory government operating without love or justice, this previously adrift young man from Barking, whose failure at the eleven-plus had reduced his career opportunities to two, bought himself out of the British Army in 1981 (‘the best £175 I ever spent’), determined to make a living out of song. After Life’s A Riot, he blazed a modest trail with similarly utilitarian follow-up Brewing Up With … (pay no more than £3.99), and ‘difficult third album’ Talking With The Taxman About Poetry (£4.49), on which Billy succumbed to the possibility of accompaniment, with additional guitar, piano and flugelhorn.

Despite his above-parapet activism around the miners’ strike and the efforts of the Labour-supporting Red Wedge – best summed up by 1985’s classic Between The Wars EP – his next album, Workers Playtime, positively jangled, with the highest ratio of love songs to protest songs yet. He played the full pop card with Don’t Try This At Home, even making a jaunty video for the Aids-related ‘Sexuality’, but went back to basics for William Bloke, reflecting a world where Margaret Thatcher was gone, the Berlin Wall was down, but the world still seemed to be on the brink. In 1998, Nora Guthrie, daughter of the late folk legend Woody, invited Billy to set a treasure trove of his unsung lyrics to music, which he did in collaboration with US alt-rock stars Wilco. The resulting Mermaid Avenue albums, Grammy-nominated, repositioned Billy in the United States. His next solo album, recorded with his regular band the Blokes, brought it all back home, to these multicultural shores: England, Half-English.

On the eve of release of his self-financed tenth solo album, Tooth and Nail, recorded in five days in acclaimed songwriter/producer Joe Henry’s basement studio in Pasadena, Billy Bragg can confidently state: ‘I did it my way.’ The intervening three decades have been marked by numerous milestones, political and personal, including going to number one, having a street named after him, being the subject of a South Bank Show, appearing onstage at Wembley Stadium, curating Leftfield at Glastonbury, sharing spotted dick with a Cabinet minister in the House of Commons cafeteria, being mentioned in Bob Dylan’s memoir, meeting the Queen, and getting royally upstaged by his son’s guitar solo at a gig in the East End with his proud Mum in the audience.

Just as the young Billy cut a unique figure in the image-conscious 80s – one firebrand and his guitar, available for weddings, parties and benefits, occasionally seen busking under his own, shoulder-mounted PA (the fabled ‘Portastack’), all the while, in the words of Melvyn Bragg, ‘making a virtue of simplicity’ – so, the elder statesman of today, bearded and ‘ruggedly handsome’ (according to one fan on his Facebook page), refuses to slip into the dotage of self-parody. In his fifties, neither the fight nor the fight songs have left Billy Bragg.

What’s seen him through 12 studio albums, seven compilations, two box sets, and countless tours across countless international borders, has been a driving sense of compassion – what he himself christened ‘socialism of the heart’. For every protest song (‘Between The Wars’, ‘There Is Power In A Union’, ‘Never Buy The Sun’), there is a declaration of love (‘Must I Paint You A Picture’, ‘Brickbat’ or, from the new album, ‘Chasing Rainbows’). At their best, Billy’s songs present ‘the perfect Venn diagram between the political and the personal (the Guardian). These are what Billy considers the songs you’d stake your life on. Countless fans around the globe feel the same way.

‘Mixing pop and politics’ is a tall order, but where there’s a starting block, there’s a great leap forward. To smuggle a song called ‘Take Down The Union Jack’ into the charts and onto Top of the Pops in the year of the Queen’s Golden Jubilee, takes a certain amount of cheek, and some clever promotion; but it also takes a tune you can whistle. (Without that, it’s a pamphlet.)

Governments rise and fall, fashions come and go, pop stars are built up and knocked down by a fickle press, and Billy Bragg adapts to survive: the one-time Luddite and failed handyman has embraced New Media and engages with fans directly via Facebook and Twitter, uploading songs when a headline strikes. His enemies remain essentially the same: craven politicians, inhumane corporations, plus assorted racists, fascists, bullies, reactionaries and people with floppy fringes.

Orator, entertainer, rabble-rouser, negotiator, leafletter, the fabled ‘big-nosed bard from Barking’, Billy Bragg is many things. A regular contributor to the national debate as TV pundit and newspaper columnist, he continues to sharpen his pen as a writer, and his first book, the considered, wide-ranging treatise on English identity The Progressive Patriot, opened up a whole new vista of possibility for a man who never stops engaging with all the trouble in the world. Whether it’s the miners’ strike, House of Lords reform, bankers’ bonuses, illegal wars, the justice system, the BNP in Barking, or the undemocratic commandeering of a Portaloo backstage at a festival, Billy Bragg will help fight your corner.

To quote his enduring live favourite ‘Levi Stubbs’ Tears’: the world falls apart, but some things stay in place. The pessimism of the former observation has never be so true. The optimism of the latter is encompassed by ‘Tomorrow’s Going To Be A Better Day’ from Tooth and Nail:

“Take it from someone who knows the glass is half-full, tomorrow’s going to be a better day, no matter what the siren voices say … we’re going to make it that way.”