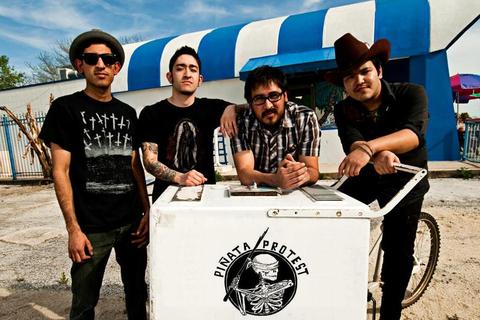 Piñata Protest is an accordion fronted punk rock band from San Antonio, Texas that fuses the raw essence of South Texas conjunto with the warp speed tempos and attitude of punk rock to create an infectious and bracing South Texas slamdance. After their national debut album on Saustex Records, Plethora, in 2011, Piñata Protest quickly gained attention for their incredible live performances. They’ve since risen from local rock and punk clubs to national tours and gigs with bands like Reverend Horton Heat, Girl in a Coma, Brujeria, The Hickoids and Los Skarnales and playing such festivals as Chicago's Latino Fest, the American Sabor Music Festival and South By Southwest.

Their newest studio project, "El Valiente," captures the powerful and playful sound that they have become known for in their live shows. It was recorded in Austin, Texas with Grammy nominated prodcuer Chris "Frenchie" Smith and will be released this spring by Saustex Records and Cosmica Records.