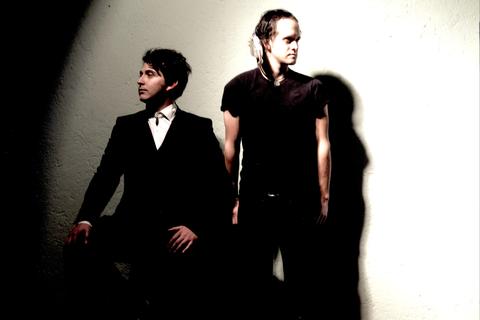 Listen to Tell My Sister

The Copper Gamins bring a bracing yet warm blast of freshness,
inspiration and imagination to the indie music world from south of the
border. The two-man guitar/drums duo bred in the mountains of Mexico may reflect the minimalist trend that yielded The White Stripes, The Black Keys and The Ferocious Few in recent years. Yet the results remind more of The Oblivions, Eugene Chadbourne and revelatory experimentalists The Residents while in the end sounding unlike anyone else. It’s raw and naïve music that rattles with emotion, harmonics and groove, and opens the door on a whole new breed of Mexicano garage rock.

Their self-titled debut EP released by Saustex Media showcases what the San Antonio Current calls the twosome’s “potentially lethal mix.” Originals by guitarist/singer José Carmen like “Ruby Red” and “Oh Girl” bind naïve love with surging passion. On Southern American blues standards like “Old Lady Sittin’ in the Dining Room” and Mississippi John Hurt’s “Candyman,” The Copper Gamins take “mellow originals and furiously reinvented each as something that has a life of its own,” notes the Current. The just over one-minute instrumental closer, “Maxima,” played by Carmen on an old mandolin with only three strings, spotlights how necessity becomes the mother of invention and innovation and brings new relevance to musical roots.

Carmen and drummer Claus Lafania hail from the nearby Central Mexican towns of, respectively, Metepec and Zinacantepec. They’re friends from high school who played Latin and American rock songs in a cover band together, Carmen on drums and Lafania on guitar. After graduation, Lafania went off to college to study music and travel in Europe. Carmen, inspired to start writing songs, switched to the guitar and honed his style playing on the streets and in coffeehouses in Mexico City. He then rejoined Lafania, whose interest in and study of ethnic rhythms made his switch to playing drums utterly natural.

They recorded the songs on the EP in an abandoned house owned by Carmen’s aunt with just a few microphones and a mixer onto a Teac four-track reel-to-reel recorder. “It was not just being lo-fi but
self-sufficient, and doing what we can with what we have around,”
explains Carmen. The results are organic with an anarchic
adventurousness. For as the Current notes, “It’s power and attitude that they’re concerned with, captured perfectly on four tracks and analog tape.”

Failing to find many supportive venues in Mexico, the two traveled north of the border to San Antonio, where they crashed, appropriately, in the garage of one of Carmen’s distant relatives. During their two-month stay The Copper Gamins barnstormed such top local clubs as Boneshakers, The Limelight, The Ten Eleven, The White Rabbit, The Mix, The Pedicab Bar & Grill and Night Rockers. They then hit Austin for a similar two-month visit, appearing at such venues as The Mohawk, The Parish, Red 7 and the Hole in the Wall. The buzz caught the ear of Saustex major domo Jeff Smith, who offered to release the band’s recordings in the U.S.

Their fervent performances drew raves from The Current. “‘Ruby Red’ was one of the most explosive, groovy openers of any show I’ve seen this year. Carmen shreds and twangs with unusual ferocity, but he’s a master of silences as well. His thing is to deconstruct the blues into a rhythmic mass that, when it’s actually finished, works like a cannon.”

Carmen draws from a distinctive and very personal mix of sources that inform his writing and style: The folkloric field recordings of John and Alan Lomax, early garage rock and punk, instrumental rock guitar pioneer Link Wray, everything from The Sonics to country singers Loretta Lynn, Dolly Parton and Patsy Cline to The Gun Club and fellow twosome Flat Duo Jets and more. Just as influential are the films and soundtrack music of Charlie Chaplin.

He also provided half of the duo’s name, taken from the character – The Gamin – played in Modern Times by Paulette Goddard. “She is like a muse to me,” says Carmen. “I love her.” Copper comes from the tubing that Carmen uses when he plays slide guitar, metallic yet soft, and into which his guitar strings carve a groove.