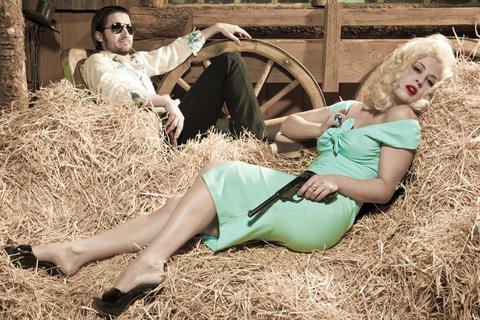 Riding high off the buzz of their National Ad campaign with Fruit of the Loom, Gram Rabbit is set to hit the road with L.A.'s "Spindrift" in support of their upcoming new release, "Brasied & Confused". The National tour will begin in early March and include a showcase at SXSW in Austin.

In the late Summer of the year 2000, Jesika von Rabbit and Todd Rutherford met in a secluded house in Joshua Tree, in the middle of the Mohave Desert. Both weary of city life, and both in search of a destiny that centered around their musical ambitions. What they found in each other, would soon spark a creative force unlike any other in popular music today. A force that continues to expand, inspire, convert, and test the limits of the status quo.

Gram Rabbit refer to their music as “Desert-Space-Rocktronica". Through five records, they have continued to reinvent themselves and evolve into unexplored territories. Combining and putting their own spin on an array of different genres, fans have grown to expect the unexpected from every release. They are indeed fearless, imaginative, and un-beholden to the music industries’ framework. Today the band consists of Jesika von Rabbit(vocals, keys), Todd Rutherford(vocals, bass, programming), Ethan Allen(guitar, vocals, programming), and Jason Gilbert(drums). GR has recorded all their records on their own, with their guitarist Ethan producing(except album 5, produced by Todd Rutherford). Several of Ethan’s other producing credits include Luscious Jackson, Black Rebel Motorcycle Club, Tricky, the Cult, Tim Finn, and Donita Sparks(L7).

Gram Rabbit’s debut record, “Music to Start a Cult to”, was released on New York’s Stinky Records in 2004 to rave reviews. The L.A. Weekly hailed them as L.A.’s “Best New Artist” at their annual music awards show, and clubs began to swell with fans eager to experience the bands dynamic live performances. Momentum grew quickly landing GR a slot on the Main Stage of the Coachella Music and Art Festival. Richard Baca of the Denver Post had this to say about their performance at Coachella:

Future of indie: Gram Rabbit: Rilo Kiley should be ashamed. The excellent L.A. band ditched Saddle Creek Records, made a sub par album, then was outshone in its backyard by Gram Rabbit, billed as Coachella's only hometown band (from Joshua Tree.) Gram Rabbit's sample-infused country was not only dynamic (and Wilco-esque), but the tracks from "Music to Start a Cult to" are defined by their restlessness. One moment it's Flaming Lips-style electro-folk, the next dance- pop. One moment lead singer Jesika Von Rabbit sounds like Kim Deal, next Chrissie Hynde. It's an aural smorgasbord, and the meager crowd at the band's early-afternoon main-stage set was left salivating for more.”

London’s “Wireless Festival” in Hyde Park and San Diego’s Street Scene Festival followed suit and invited the band to perform. After which, the UK’s press joined in on the accolades printing comments such as:

“What a find this quirky Joshua Tree-o has turned out to be...Think Portishead on horseback”
- Derek Adams -Time Out London

Back in the States, GR’s fan base grew steadily as they honed their live chops playing or touring with the likes of Le Tigre, Maximo Park, the Raveonettes, Satellite Party, Kinky, Ima Robot, West Indian Girl, Lotus, the Handsome Family, the Lovemakers, Electrolane, the 88, John Doe, the English Beat and many more. GR’s live antics continued to leave a big impression on fans and the press alike:

SXSW Best In Show “ Gram Rabbit a desert trance band that is like Garbage and the B-52’s with serious content.”
- Brad Kava San Jose Mercury News

“Fronted by a woman who calls herself Jesika von Rabbit, teeters uncertain on 4-inch heels and exponentially enhances her allure with obstinate sullenness, Gram Rabbit offer up in spectacle exactly what they do in sound: music that reminds you of everything from eerie desert twilights to Carter-family country and then again sounds like nothing you’ve ever heard; a little twang, a lot of machine noise, some vaguely trancelike slowed-down synth effects, some fine psycho-pop lyrics about Jesus and cowboys and unrepentant goofiness.”
- Judith Lewis LA WEEKLY

The past six years have brought four more full lengths from the band. The spacey introspective “Cultivation” in 2006, the socially-political themed electro-rock “RadioAngel & the RobotBeat” in 2007, the epic spiritually driven “Miracles & Metaphors” in 2010, and the throwback spaced-out country styling’s of 2012’s “Welcome to the Country”. The band's new psychedelic dance-rock record "Braised & Confused" is set to be released in early 2013. To date their records have produced more than 30 licenses in television series, National commercial campaigns, and film, with more than 20 different tracks used in these spots. NBC, CBS, ABC, FOX, CW, FX, BRAVO, STARZ, and MTV have all used the bands music in hit shows like CSI, Life, the Real World, Sons of Anarchy, Crash, and Ten Things I Hate About You, just to name a few. Kyocera and Fruit of the Loom have used the music to promote there products in National television campaigns. Motion pictures such as “Crazy, Stupid, Love(Steve Carell, Emma Stone)”, “War Inc.(John Cusack)”, and “Interview(Steve Buscemi)”, have included the cinematic sounds of GR in their films.

Armed with two new releases an a celebrated live show, Gram Rabbit’s stock will surely rise. A destiny once measured in ambition, is now one measured in accomplishment.

Gram Rabbit is the music I’d been looking for, even though I didn’t realize I was looking. Edward Abbey wrote: "Love flowers best in openness and freedom." Gram Rabbit are proof that the same is true for music.
-Helen Jupiter – Editor at Suicide Girls.com