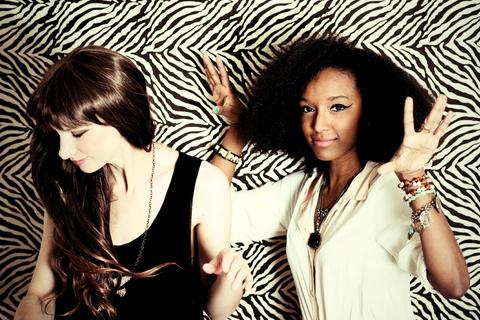 The OKAPI SUN will rise in Austin Texas this March as the duo makes its SXSW debut with an official invite to the conference not long after its conception. The girls combine Dance, Electronic, Samples and Tribal Beats with Garage Rock. The band is fresh on the scene and just weeks out of the studio with a new self released record due out this summer.

WE ARE OKAPI SUN
"LESE" legend says, the Okapi decorates itself with its different stripes to become one with its surroundings and add to its great camouflage.

Our music is a cut and paste of our past, our now, our culture, our soul.
We decorate ourselves with sounds and let them form into songs.

Best friends Leo and Dallas have been traveling Europe and the USA for the past year. They met in London at a suburb train station.
Their songwriting happens out of ideas, experiences, loves, broken hearts and their travels. Their sound is a cut and paste of new encounters, different cultures, and nature. When they get together and play music it just clicks. Leo mostly comes up with some beats and hook melodies while Dallas comes up with interesting harmonies, strings and cool synthesizer parts. When they sing together their soft voices blend very well. Their different upbringing and cultural background makes their music interesting. Dallas is Hispanic, African, Norwegian and Native American while Leo is French, German and Czech.