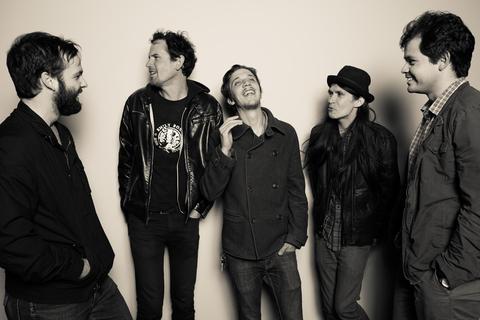 With the addition of samples, a couple guitars, and live traps backed by programmed beats, Hills Like Elephants announces their presence on the national scene with a dance-friendly re-imagination of indie rock, lo-fi disco, and what frontman Sean Davenport calls "Motown with drum machines."
On their sophomore effort, Feral Flocks, San Diego indie soul stalwarts grow from a solo project of keyboard crooner Davenport (Gun Runner, Abigail Warchild) into a full five-piece band.
(Feral Flocks REQ06 Requiemme Records/BMG Chrysalis - February 12, 2013)
Only months after the release of their debut The Endless Charade, Hills Like Elephants were crowned Best New Artist at the 2012 San Diego Music Awards and went on to play a series of hometown performances to venues so full, not even Hemmingway could get a drink.
"On The Endless Charade, I was harping on the idea of past relationships, but I was also trying to move on," says Davenport. "Feral Flocks is more about noticing the subtleties of life, but I'm not trying to be profound. If I wouldn't say it to you at a bar, I won't say it lyrically."
Engineered by vintage aficionado Christopher Hoffee at CHAOS Recorders, Feral Flocks attests to the fact that Davenport's fire is not fueled by grief and heartache alone. Rather, the band finds an uplifting groove that tells of newfound inspiration.
Opening number "Ninjavitus" sets the tone with shimmering keys (Greg Theilmann of Odd Shapes), a whimsical, mock-Orient guitar lead (Andrew Armerding of River City), Daniel Gallo’s driven bass lines, and beats backed by the calculating rhythms of Carlos Ortiz from Davenport's prior outfit, Gun Runner.
The band recently completed a video for “Ninjavitus” (directed by visualist Eric Casas) poking fun at the daily promotional chores of just about every contemporary band, which requires everything from internet solicitations to sign spinning skills on a street corner.
"Splendor," continues the coltish resolve with a chorus that, minus the track's New Wave abandon, could come off as bitter: "Oh, there you go, walking slow, and I need you there."
Instead, it rings of admiration.
"Mystifying Oracle" elaborates on Feral Flocks' quixotic disposition with expansive guitar hooks, ecstatic builds, and a star-crossed breakdown which wonders, "Am I ever gunna wake up where you are?"
With a tour on the horizon (first stop, SXSW 2013) and two knockout albums under their belt, there's no saying where the band will wake up next - but who cares?
After all, up here in the Hills, the view is extraordinary.