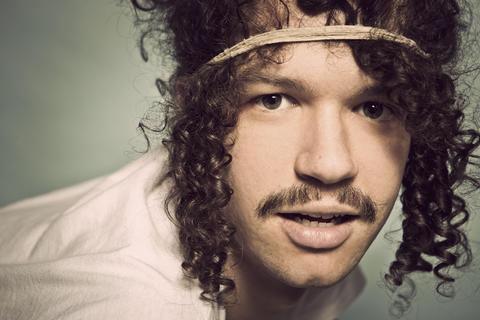 Listen to You Can't Be My Girl

Born in Chapel Hill, North Carolina to Maher Baba disciples, Darwin studied and performed as a tap dancer from age 8 to 18. His first compositions were guitar pop songs that he wrote aged 11 after his father, an amateur songwriter and a professional psychologist taught him his first chords.

After attending and promptly dropping out of Wesleyan University, Connecticut Darwin moved to NYC’s East Village. Here he worked as a waiter at a vegan restaurant whilst picking up his guitar in spare moments, this time with less strings and a less traditional approach to composition. Inspired by Animal Collective and The Strokes, he composed noise pop that no one ever heard, then got serious about music and started attending open mic nights. Having discovered the joy of lyric writing and becoming “Darwin Deez”, he created his successful eponymous debut, which featured future hit singles ‘Constellations’, ‘Radar Detector’ and ‘Up In the Clouds’.

Forming a band, member by member until there were four, they signed to UK independent label Lucky Number in late 2009 and spent the next 2 years touring the world. When time came to make album two in the fall of 2012, Darwin relocated from the chaotic hustle and flow of New York City to Asheville, North Carolina so he could work and record free of distractions. The results? 2013’s sophomore LP ‘Songs For Imaginative People’, which was released on Feb 12th 2013.

Singularly a brilliant, hilarious, complex, entertaining individual, Darwin Deez writes songs that will make you want to bust out your dancing shoes while also cutting to that raw, emotional nerve. Don’t miss your chance to witness a rare insight into everything a pop star should be, and yet so rarely is, as Darwin Deez hits SXSW in 2013.