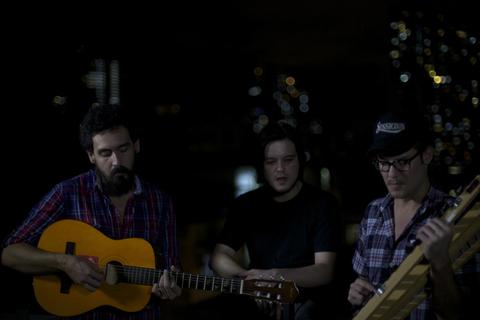 Listen to We Were Kids

It’s not easy to stand out in the proliferating indie rock cliché – a cesspool of mediocrity and forced emulation. Turtle Giant gives any reference of cliché a roundhouse kick to the face.

Formed in 2009, Turtle Giant has been laying the bricks for what has become a multi-national, multi-dimensional musical escapade.

After writing and recording their 2011 debut album Feel To Believe and building a strong following in their Brazilian homeland, the band made a cross-continental leap settling in Barcelona and playing dates across Spain for the majority of 2011. Fearless and hungry for new horizons, 2012 saw the band part with its growing Spanish fanbase and traverse the globe yet again for Macau – the band’s current locale. Amidst rampant touring across Southeast Asia, the band performed at notable festivals including the Spring Scream Festival in Taiwan and the Music Matters Festival in Singapore in early 2012. They were also picked to perform at KEXP's CMJ Union live broadcast along with The Antlers, DIIV and Paul Banks.

With top-notch songwriting and polished instrumentals, Turtle Giant delivers hard-driving, melodic rock infused with modern psychedelia and classic rock undertones. The band’s debut single “Sunlight” from Feel To Believe caught the attention of music supervisors and has seen placements on primetime television in The Ghost Whisperer, One Tree Hill and 90210.

Fueled by their early success, the band’s next recorded endeavor comes in the form of the self-produced All Hidden Places EP (Self-Released), which was recorded at the historic Dom Pedro V Theatre in Macau and was mixed and mastered by Fernando Sanches at Studio El Rocha in São Paulo, Brazil. Driven by the anthemic lead single “We Were Kids”, the EP showcases the band’s development into a veritable force to be reckoned with. With notable influences stemming from classic rock, psychedelia, blues, and traces of grunge, All Hidden Places delivers five emotionally-charged songs that emerge infectiously simple yet gracefully gargantuan.