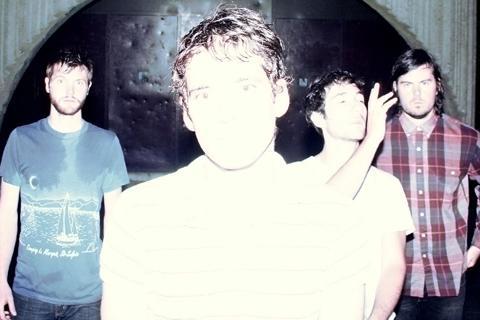 Montreal's Suuns possess a rare trait in rock music: restraint. They use it like an instrument, which makes their debut full-length Zeroes QC as unsettling as it is wonderfully exasperating. It's immediately apparent in album opener "Armed for Peace," a track that starts off like a robot breaking down in a hot desert; the song's mechanic beat plods like iron-shoed footsteps as the melody of a wheezing synth mirrors the crackling sound of old transistors and circuitry being cooked in the sun. It's deceptively lulling, the tension almost unnoticeably wrenching up and up until the track unexpectedly opens into a barrage of nose-diving guitar riffs and crashing drums — yet the band still stays locked on the song's linear, forward-motion direction.
Suuns were born during the summer of 2006 when vocalist/guitarist Ben Shemie and guitarist/bassist Joe Yarmush got together to make some beats which quickly evolved into a few songs. The duo were soon joined by drummer Liam O'Neill and bassist/keyboardist Max Henry to complete the line-up. "I don't think we were really a 'band' for the first year," Ben surmises. It wasn't until a friend helped them procure a spot at Pop Montreal 2007 that he says the group played their first "real gig."
Last year, Suuns entered Breakglass Studios with Jace Lasek of the Besnard Lakes co-producing and engineering, and recorded their first album. The group wanted to create something that couldn't be pigeonholed as simply indie rock. "Jace definitely had a huge impact for bringing to life the big sound of the band and being open and willing stretch out any idea we or he had," Ben explains.
The resulting Zeroes QC is a warm yet dark, propulsive collusion of pop, post-punk and experimental rock — one that allows the group to musically shapeshift without losing any of the sense of tension and unease that runs throughout the record. During tracks like "Gaze," tightly wound guitars and bass ring and buzz atop Liam's metronomic, powerhouse drumming, with Ben's cool, detached vocals acting as a nervy counterweight as he delivers falsely assuring lines like, "Don't you be yourself, you are someone else." Often his close-miced sing/speak is as metronomic as it is melodic; in "Arena" Ben's rhythmic "What-choo, what-choo"'s are reminiscent of Suicide's Alan Vega as he leads the band's death disco groove into a bloodbath of razor-sharp guitars, while his icy, hushed delivery in "Sweet Nothing" is almost as motorik as the song itself. Most impressive, though, is how Suuns effortlessly sculpt memorable pop songs from experimental building blocks, frequently using noise and space as actual hooks. All of this amounts to a great first album — one that is as timeless as it is thrillingly modern.