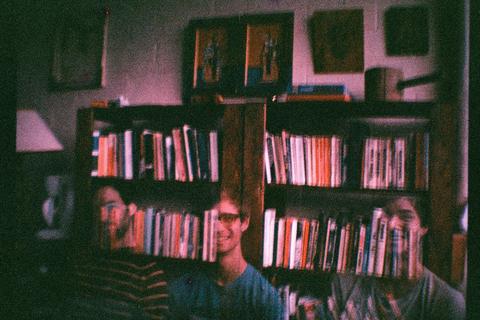 Each Other do not write songs that tell you things. They are full of
ideas, fill you with ideas, but don't mean to curb your own burgeoning
experience. The melodies never betray a certain mood, never end at the
ending, begin before you've escaped the last one. Everything inside
overlaps in a peculiar way, allowing them to store more in the space
of a song than seems reasonable.
The three members, Brad Loughead (vocals/bass/guitar), Mike Wright
(vocals/bass/guitar) and Christian Simmons (percussion/tape echo) each
play an integral role in the composition and execution of their
decidedly psychedelic reveries. Hailing from Halifax, Nova Scotia, a
well-known breeding ground for unheralded artistic achievement, Each
Other relocated to Montreal just over a year ago and have been
received with an anticipated and much-deserved fervor.
Having released a short run cassette EP and a 7” on Brooklyn's Prison
Art and Crikey labels respectively, and toured North America a few
times over, the trio is currently prepping for the release of a new
12” for October 25th, the dark and sharpened Heavily Spaced EP, and
packing their wool socks and sweaters for a European jaunt in late
2012.