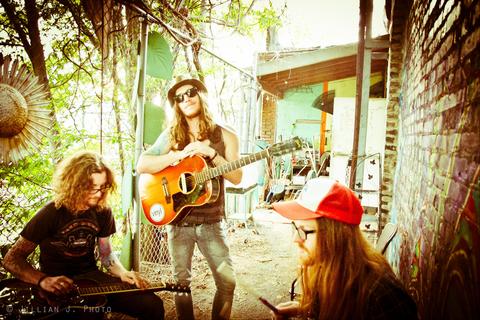 Listen to Get Your Buzz On

While The Cadillac Black might be a brand new band – a little over a year old as of this writing – native Nashvillians Jaren Johnston, Neil Mason and Kelby Ray have been friends and musical co-conspirators for as long as anyone can remember. They’ve weathered their wild teenage years and even wilder tours, weathered major label letdowns and major league triumphs, conquered Music Row – Johnston co-wrote Keith Urban’s #1 single “You Gonna Fly” – and crashed on the couches of strangers in far flung cities. These boys have seen more ups and downs than a Smoky Mountain tour guide.

But in spite of all the trials and tribulations – or perhaps because of them – The Cadillac Black have emerged with a sound all of their own, a sound that hovers between radio-ready country anthems, hard-and-heavy rock and traditional Southern folk. You could call it country fuzz, you could call it hipster-billy, you could call it any number of over-hyphenated, adjective-strewn things but when you boil it all down there’s only one way to describe it: damn good music, as pure and refreshing as a country creek.

It’s a sound that works as well in front of an amphitheater full of ZZ Top fans or the Dierks Bentley crowd as well as it does in the dive bars and dark corners of the underground music. Though, truth be told, the Cadillac Black’s sound probably works best blaring out of your car speakers as you fly down the highway, wind blowing through your hair on the way to another wild Saturday night.

Built around Masons thundering, melodic percussion and the sinewy intertwining of Johnston’s guitar with Ray’s lap steel, songs like “I’m Southern”, “Days of Gold” and “Whiskey Soaked Redemption” on their self-produced debut bristle with energy and explode at a moments notice. Tracks like “Down to the River”, “Get Your Buzz On” and “Back It Up” evoke the legends of Southern Rock – your Molly Hatchets, your Outlaws, your Ozark Mountain Daredevils – but they aren’t nostalgic, aren’t fetishistic reconstructions of by-gone eras. This the new sound of the New South, bigger and badder than ever