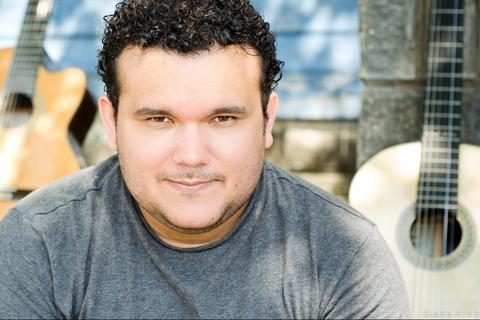 Born in Brazil (1980), 2010 ASCAP Young Jazz Composer Award Winner, Gabriel Santiago is a Composer/Arranger/ Acoustic and Electric Guitar Player. Called by JazzTimes Magazine “a young master at both the acoustic and electric guitars” and his compositions defined as “stunners”, Santiago is currently living in Austin, Texas, where he just completed (with high honors) a Doctoral Degree in Music Composition at the University of Texas at Austin.

Santiago has collaborated with a wide variety of artists such as Esperanza Spalding, Chris Potter, Stefon Harris, Terence Blanchard, Carmen Bradford, André Mehmari, Romero Lubambo, Odair Assad and Gilson Peranzzetta among others. He has been featured as a guest artist at Universities and colleges across America like The University of Wisconsin Stevens Point. With The Gabriel Santiago Quintet, he has been touring US and Brazil in support of the self-‐ titled DVD. Along with leading his Quintet, Santiago has been writing and performing with The Gabriel Santiago Orchestra. The ensemble recently released the DVD/CD ALIVE, featuring his jazz orchestra compositions exclusively. Recent career highlights feature a 22-‐minute piece for Symphony Orchestra and commissioned works from the UT Trombone Choir and Dallas Wind Symphony.