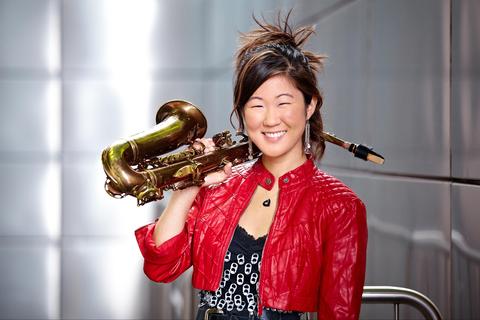 "Grace Kelly plays with intelligence, wit and feeling. She has a great amount of natural ability and
the ability to adapt that is the hallmark of a first-class jazz musician."
Wynton Marsalis

GRACE KELLY - "MUSIC FUSION MASTER"
When it comes to singer/ saxophonist/ composer/ lyricist/ arranger/ producer/ educator Grace Kelly, people seem to be divided into two groups: those who marvel at her proficiency, creativity and ever-accelerating growth, and those who have yet to encounter the 20-year-old wunderkind. The ranks of the former category are growing by the day. Trumpeter and Jazz at Lincoln Center Artistic Director Wynton Marsalis was so impressed with Kelly’s three-night stand as guest of the Jazz at Lincoln Center Orchestra that he invited her to join the ensemble at the Kennedy Center’s Eisenhower Theater in Washington, D.C. for Barack Obama’s Inauguration Celebration. Harry Connick, Jr. heard Kelly in a master class on a December afternoon and brought her on stage to sit in with his band that night. Since then, Kelly has been voted "Best Jazz Act” in Boston four consecutive years in the FNX/Phoenix Best Music Poll, and then voted Best National Jazz Act in 2012. She has received the ASCAP Foundation’s Young Jazz Composers Award in 2007, 2008, 2010, and 2011 and won "Jazz Artist of the Year” at the Boston Music Awards in both 2008 and 2010. The 2009, 2010, 2011 and 2012 Downbeat Critics Poll added to her the list naming her one of the "Alto Saxophone Rising Stars”, the youngest artist ever to be named to the music poll.

On Live at Scullers, her newest and eight release Kelly offers a set mostly composed of new material which shows off her remarkable versatility. Her sax chops have been granted the imprimatur of jazz elders like Phil Woods and Lee Konitz, both of whom have recorded with her. But here, Kelly’s instrumental virtuosity shares the spotlight with her winsome voice via her most song-oriented collection to date.
Kelly boldly offers her mission statement on the opening track, "Please Don’t Box Me In.” The title plea is made by a gifted musician and songwriter who sees no reason why the music she makes should be more single-minded than the music that she enjoys.
"I listen to a wide range of music, from Miles Davis to John Mayer,” Kelly explains. "Lately I’ve been listening to more contemporary music and songwriters and at the same time I’ve been more inspired to write songs. Growing up and learning the saxophone, I always listened more to singers than instrumentalists. Whenever I play a standard I always make sure to know the lyrics behind it. I feel like words are a really big connection between myself and the audience.”

Kelly recently graduated Boston’s Berklee College of Music at age 19. "I auditioned for Berklee and received a full scholarship, I got my GED and started college at 16. It’s been great, playing all the time and just living music all day. I’m learning so much and I’m playing all kinds of music. It was a challenge to balance college with all the touring I do with my band but I was able to do both."
Grace has taught residency workshops at Berklee College in 2012
Since age 12 Grace has performed over 500 concerts as a leader all around the world at prominent venues such as the Montreal Jazz Festival, Newport Jazz Festival, Lincoln Center, Carnegie Hall, the Kennedy Center, the Apollo Theater, Birdland, Boston’s Symphony Hall, Juan Les Pins Jazz Festival, Dizzy’s Club Cocoa Cola, Tanglewood Jazz Festival, Detroit Jazz Festival, Ronnie Scott’s (London), Porgy & Bess (Vienna), Scullers Jazz Club, Regatta Bar, B.B. King’s Blues Club (New York City), Jazz Bakery (LA), Dakota Jazz Club, and in venues as far away as Europe and Asia.
Without hesitation, Grace Kelly will tell you that her goal is "to stay in jazz but also do different things, bigger arrangements, like Stevie Wonder and George Benson.” Monty Alexander says, "She is not an artist for Jazz lovers only but one for the whole world.” Her ambition has yet to outstrip her talent, and Grace manifests only the beginning of the young artist’s quest to continue to reinvent herself. As Ann Hampton Callaway predicts, "There is no telling how far this child prodigy will go with the limitless possibilities of her voluminous talents.”