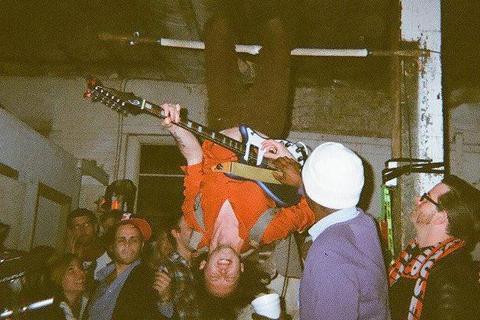 Listen to If You Want Me To Stay (for a while)

After electrifying Washington, D.C., with its scorching live show for more than a year, Shark Week released its first recorded contribution to the city’s burgeoning music scene in August 2012.
Hearkening back to the glory days of rock ‘n roll, the debut EP, titled simply “EP,” distills the raw energy of the four-piece’s punk-infused garage sound into a hip-shaking three-song package.
When not hanging upside down or swinging from the rafters, frontman Ryan Hunter Mitchell thrills with his gravelly baritone and screeching guitar solos over Alberto Pacheco’s jangly guitar leads. Danielle Vu’s pulsating bass rhythms and pounding drums from Dan Newhauser anchor the group.
A series of high-energy shows up and down the East Coast, have garnered the band comparisons to Johnny Thunders, the New York Dolls, the Brian Jonestown Massacre and the Strokes.