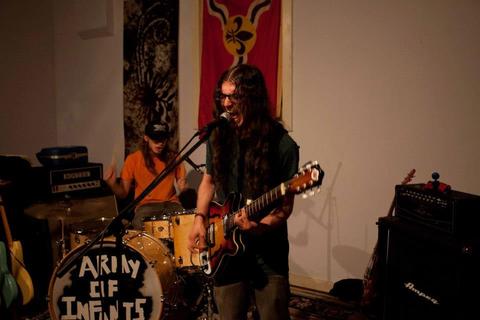 We are a band.Two piece. Jake bangs sticks on things and shouts, Jared breaks strings and mumbles. We have been around for close to three years. The sound we make is raw and loud. Self-released 7" last February, available via bandcamp online and at any show, while supplies last.

"If you like rock, blues, doo-wop or, better yet, a combination of all three, then you’re in luck because the Dayton two-piece outfit Army of Infants will be coming out to blow your minds with some hard rock 'n' roll. They’ll make you feel like you’re back at a sloppy, seedy club show rocking your faces off the way rock intended.

Jacob Pflanzer pounds away at his drums while Jared Welch shreds on his guitar and delivers distorted vocals. It’s the stuff good ol’ rock shows are made of and the two pack more than enough bluesy punch that you’ll throw caution to the wind and probably knock over, or you know, throw a chair or two in the process."
-ACRN-The Rock Lobster,Rachel Haas

"With a two-piece band, the whole show is almost entirely a display of pure garage chops. Work the drum beat like a hammer, use the guitar strings like a drill. Keep in time, push the tempo. Each song blends into the next, in a swirl of Buddy Holly, Bo Diddley, and Nuggets burners and mid-tempo rockers. Tear it down and set it back up again. They work through a forty five minute long set, climaxing with the Peter Gunn gone mad, Busted in BG right into Main Street Blues."
-Reckless Allegations,Art Krinkle

"Merely a two-piece, Army of Infants is built from the foundation of Jacob Pflanzer (drums) and Jared Welch (guitar). Blending the grime of ‘90s grunge and the upbeat intensity of mid-century surf rock, the duo formulates its own source of hardcore punk."
— Bethany Turner , Encore

"Ever woken up with a grisly hangover and thought, “Man, I wish I had some obnoxiously loud bluesy rock n’ roll to blast all this bad shit out of my brain?!” Dayton, Ohio duo Army Of Infants have got the cure. “Main St. Blues” is the A side of their debut single, and it’s a blur of distorted vocals and gloriously sloppy riffs. "
— Zach Braun, Get Bent!

“The Black Keys' dude-blues can be too much for some. But what immediately comes to mind upon listening to the also-from-Ohio Army of Infants is how refreshing it is to see this style as delivered by a raucous garage outfit. With blues-rock riffs slathered in feedback, casual-to-offhand vocals and drums that suggest the post-grunge bounce of mid-'90s alt-rock, Army of Infants' ability to reach beyond the borders of blues makes it a necessary recommendation for anyone burned out on the genre. ”
— Corbie Hill, Indy Weekly

"They’re not an army (there’s only two of them) and they’re not infants (although they are young), but Army of Infants still has a lot going for them — like their bluesy guitar riffs and ’90s-style grunge singing that would make Kurt Cobain put down his needle and take notice."
— Buzz Bin Magazine

“...the youthful duo, Army of Infants. After cutting their teeth at The Buddha Den NTRO/XPO earlier this spring, the band has begun making waves around town. Taking cues from late 60s blues riffage, early 90s grunge, and modern experimentalist duos like Wavves and No Age, these youngsters show signs that they may be on the scene for some time to come….”
— Buddha Den, The Buddha Den