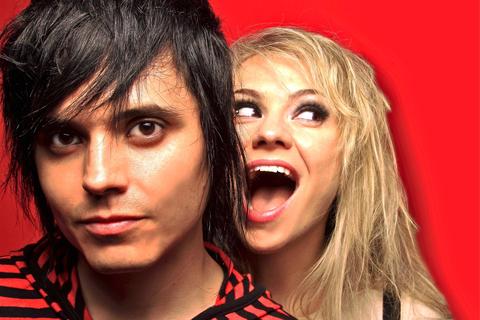 We are The Dollyrots. We're a rock and roll band from Los Angeles. Lead singer Kelly Ogden is a sweetheart who brutalizes her basses and sings like a thousand angels descended from Heaven. Guitarist Luis Cabezas writes with more hooks than a pirate ship, plays a mean 3-note solo, and screams along. The two of us are California transplants - originally from Florida - who moved to L.A. to live the rock 'n roll dream. We've clawed our way through 600 shows in the past 8 years on the road supporting the likes of Bowling For Soup, Buzzcocks, The Go-Gos, Paramore, and Joan Jett. We grew up children of 90's alternative rock, love 70's punk and garage, and even the occasional Tiffany song.

After a debut album on Lookout Records (Eat My Heart Out) and two albums on Blackheart (Because I'm Awesome, A Little Messed Up) we decided to go independent for our September 28, 2012 release with the help of our insanely loyal fans. They pledged support through a wildly successful Kickstarter campaign that provided recording funds in exchange for locks of our hair and tons of other fun stuff. The result, The Dollyrots, is a mix of super-slick modern pop, classic three-chord punk rock, and a healthy dose of 80's new wave. All the sugary, catchy, and aggressive elements that define our band remain, while producer John Fields' spontaneous and decisive recording style creates an urgency unheard since our first album.

Our music and faces have shown up on screens big and small, placed in lots of film & TV including CSI:NY, Vampire Diaries, and Easy A. We've also been featured in ad campaigns for Kohl's and Hewlett-Packard. In September 2012 we released our 4th full length album to the masses, reaching new fans, and bringing The Dollyrots straight to the ears of the current fans that helped make it happen. Upon release we toured with Prima Donna in the US before joining Bowling For Soup as main support for their UK & Ireland Tour. We are The Dollyrots. Expect us.