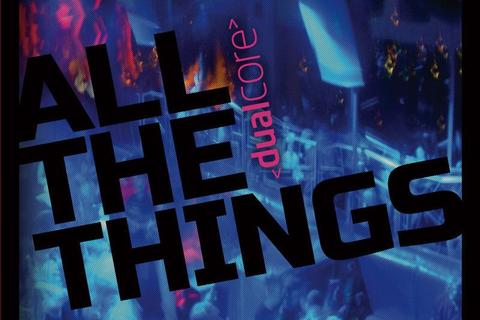 Listen to All The Things

BROUGHT TOGETHER BY THE POWER OF THE INTERNET (AND PERHAPS A TOUCH OF MUSICAL PROVIDENCE), CALIFORNIA BASED COMPUTER PROGRAMMER / RAPPER INT EIGHTY AND ENGLISH WEB DESIGNER / MUSIC PRODUCER C64 HAVE BEEN ROCKING THE MORE STUDIOUS SIDE OF THE HIP HOP UNDERGROUND SINCE 2007.

Their debut release Zero One, featuring Counter-Strike anthem Hostage Down and club banger Give Me Wings, was summarily embraced by the tech set as a welcome shift in the contemporary hip hop paradigm.

It’s somehow only fitting that it wasn’t until after the success of this musical social experiment that the members of Dual Core finally met face to face, further cementing both their unique friendship and the strength of their artistic collaboration. The group’s follow up, the Super Powers compilation, combined eighty’s skillful storytelling and 64′s frenetic beats with additional contributions from nerdcore heavy hitters ytcracker, ZeaLouS1, Beefy and MC Wreckshin, and precipitated a veritable flurry of major concert opportunities.

In the aftermath of Super Powers, Dual Core became the first nerdcore group to play both the main stages at Las Vegas’s DEFCON, the world’s largest hacker convention, and the CCC Camp hacker conference in Germany. The crush of gigs and the rabid response of new fans led to quick sell outs of both albums. Thankfully, in 2008 Dual Core released their second full length, Lost Reality – boasting hacker love song My GF Is… and blistering posse cut Fantastic Four, at Notacon in Cleveland, Ohio.

The duo continued to support the artistic triumph that was Lost Reality by gigging coast to coast at US hacker conventions, technology conferences and even Orlando’s Nerdapalooza, the world’s only festival dedicated solely to the music of geeks and technophiles. By the release of 2009′s epic follow-up Next Level, these venues, as well as media outlets like wired.com and internet television network Revision3, had become old haunts to the duo and their unique sound.

With this fourth release, a collection of musings about the joys of music, the banality of the daily grind and the miracles of modern technology, Dual Core continued to exhibit the kind of artistic growth that is the very bedrock of all quality music. With sharper production and more cleverly calculated flows, it is a fitting soundtrack to the 21st century. In a world where the underground cultures of hip hop and computer tech have leapt stylistic and scholarly boundaries to become the accepted parlance, their amalgamation is nothing short of expected. Yet somehow, Dual Core is scarcely what one would call predictable.

Following the release of Next Level, Dual Core continued to consistently rock stages across the US, whilst at the same time writing and recording new music. This culminated in the release of an eagerly anticipated fifth album entitled All The Things in August 2012. The launch was celebrated with an online listening party broadcast live on YouTube, and a series of Las Vegas shows featuring both int eighty and c64.

The latest album prides itself on a classic hip hop feel, with numerous guest appearances from renowned artists such as Blueprint and Canada’s Backburner crew, whilst at the same time pushing the creative envelope with various new sounds, rhythms and flows. All The Things quickly gained a solid listener base; within days topping the best sellers charts on the popular online music store Bandcamp, and gaining recognition all over the internet.

Towards the latter part of 2012, on the back of the release of All The Things and numerous US shows, the group played venues in Belgium and Colombia; rounding off another exciting chapter in the world of Dual Core.