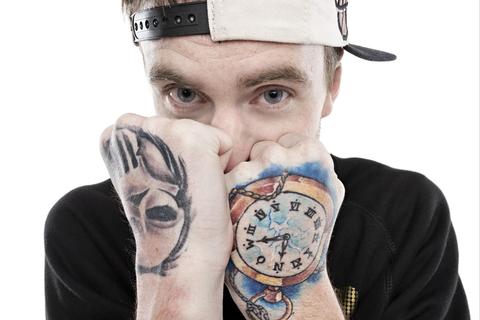 Another week, another accolade - that seems to be the motto 360 lives by these days.

The past 12 months have seen him notch up a Top 5 ARIA single and album, 10 ARIA nominations for 360/Falling & Flying, a 4 x platinum single for Boys Like You (platinum status for the Falling & Flying album & current single 'Run Alone' previous single ‘Child’ as well as gold status for single ‘Killer’), a Most Hunted Award at the Jagermeister Independent Music Awards, three sell-out national tours and the Channel [V] Oz Artist 2011 award, you'd be forgiven for thinking the quick witted Melbourne rapper was running out of available shelf space.

But those are the perks of having an online army that totals over 420,000 Facebook fans and 48,000 Twitter followers. Sixty realises that with great popularity comes great responsibility. For every new fan inducted to his online world, 360 seems to have a hilarious jpeg, witty tour anecdote or exclusive MP3 to share - all of it delivered with his special brand of unbridled individuality and warped humour. It's what keeps the punters coming back day after day, and keeps his album Falling & Flying in the ARIA top 50 (still).

Despite the unstoppable online hype, it's 360's music that speaks the loudest. Falling & Flying continues in the tradition of 360's free mixtape series (Please Be Seated 1, Please Be Seated 2 and Stand The F**k Up - Google 'em!), in offering the listener a no-holds-barred, cross-genre assault.

Highlights on the album are many - there's the Whitest Boy Alive-sampling first single 'Just Got Started', the Josh Pyke-featuring follow-up 'Throw It Away', and anthemic gold single 'Killer' (all produced by Melbourne 'it' producer Styalz Fuego, the album's key musical contributor). What Falling & Flying also does deftly is explore some much darker spots, as experienced by the artist himself. It’s candid stuff; all delivered in Sixty’s forthright, unique but truly relatable manner.

But it's the summer single 'Boys Like You' that has really gotten people talking. With a sweaty dancehall reggae vibe, a beautifully breezy chorus by indie darling Gossling and some frank admissions about 360's own past relationship woes, the track has been pumping out of stereos all summer long. Indeed it skyrocketed to #3 on the ARIA single charts and has achieved a massive 4 x platinum since the start of 2012.

Meanwhile, 360 looks set to keep notching up fans and praises - might be time to build an extra shelf (or get a bigger bandwidth).