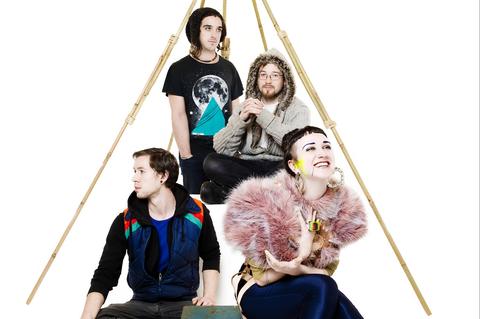 The opening song in Hiatus Kaiyote’s debut EP, Tawk Tomahawk, instantly fills you with wonder. Guitarist and lead singer Nai Palm’s vocals are both raw and pure, weaving in and out of a harmonious blend of strings and snares. Your curiosity is piqued, and for ten songs, you transcend from your seat to the distant lands of Australia.

The Melbourne-based quartet describes their sound as future soul. The truth is that their music does not fit within the boundaries of a single genre. Each track has an identity of its own and adds to a mash-up of jazz, hip-hop, soul, electronic, rock and opera. Subtle hints of the band’s influences, ranging from Stevie Wonder to Bjork to J Dilla to Flying Lotus come to your attention during the listening experience.

Hiatus Kaiyote formed through a series of jam sessions at house where three of the members lived in 2011. The group is comprised of Nai Palm, keyboardist Simon Mavin, bassist Paul Bender and drummer and producer Perrin Moss. Through a musical symbiosis, the band has created their own lane—bringing Nai Palm’s intricate lyrics to life. Tawk Tomahawk showcases the breadth of their expertise and attention to detail through its complex arrangements. In describing the band’s philosophy, “Music has always been medication to me, a force used for self-healing”.

Tawk Tomahawk was released in spring 2012, and quickly climbed up the indie charts. The EP garnered attention from notable DJs like Gilles Peterson and artists like Erykah Badu and Questlove of The Roots. To date, Hiatus Kaiyote has performed internationally, sharing stages with artists like Taylor McFerrin (Brainfeeder) and José James (Blue Note).