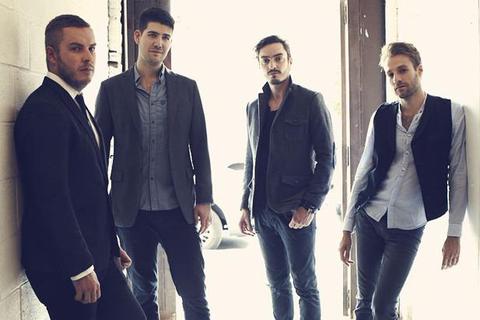 Civil Twilight is a mystifying blend of atmospheric sounds with swirling guitars and hazy story¬telling centered on the struggles and triumphs of human existence. Three parts South Africa and one part Nashville, Steven McKellar, his brother Andrew, Richard Wouters and Kevin Dailey combine power and grace to provide a soundtrack for everything from the cracking of a heart to a walk around the block. Their sophomore release, Holy Weather is a remarkable journey through a dense forest of emotion and has been heralded as some of the best music to come out in 2012.

Civil Twilight provides a safe haven in which to seek refuge. Steven’s vocals come forth in an eerie falsetto that can only be described as a cross-pollination of Jeff Buckley and Thom Yorke. Richard’s drums are pounding reminders that the drummer always steers the ship along its voyage, while Andrew’s guitars alongside the newest addition of Kevin on keyboards and vocal harmonies cre¬ate intense musical waves proving that a rising tide truly does lift all boats. Civil Twilight’s lush soundscape is haunting, yet soothing at the same time.

Steven, Andrew and Richard grew up in Cape Town, South Africa, best friends since childhood. Steven and Andrew’s mother, a classical pianist, played opera throughout the home. It was after the three started listening to grunge music that Civil Twilight, a fierce combination of both operatic and alternative elements, was born. While their South African roots provided much inspiration, the three friends grew restless and relocated to Los Angeles. Their self-titled debut was recorded in South Carolina after which Steven, Andrew and Richard settled in Nashville. Many years later, home has become a little town called Nashville, where they met Kevin Dailey and were so taken by his talent and artistic nature that they invited him to join Civil Twilight. Holy Weather was written in part to explore the nature and culture of the people of Nashville. The writing process shifted on Holy Weather from Civil Twilight’s first release. When Steven start¬ed writing songs for their follow-up album, he used the most powerful tool at his disposal: postal¬gia. “When you’re constantly in motion, you can’t sit down and spend hours looking at something; you don’t have time to really absorb what you’re going through so you absorb subconsciously and write about it later as you reflect on it. There’s a difference between actually being in the moment, writing about it as it affects you, than when it’s flashing through your memory later on.” This new approach to songwriting proved to be more challenging. However, all four members agreed that they wanted to craft an album that was a real test to play, not in terms of technique but in terms of exploring a longing that they hadn’t been able to discover on the previous record.

Civil Twilight spent the better part of the last year on tour playing the likes of Bonnaroo and Voo¬too Fest, opening for acts like Smashing Pumpkins and Florence & The Machine, and headlining their own shows across the country. This year, they have been touring relentlessly, making festivals tops with bands like The Dave Matthews Band, Flaming Lips, Red Hot Chili Peppers and The Afghan Whigs. This fall Civil Twilight will embark on a nationwide tour with Mutemath. Civil Twilight is exceptional in their rare gift of tangibility and fragility. Their songs are an intro¬cate maze of story and harmony. It is music for a world that is not quite dark and not quite light, much like that moment before the sun sets when we stop and take a breath.

The show at Antone’s on Saturday, March 16