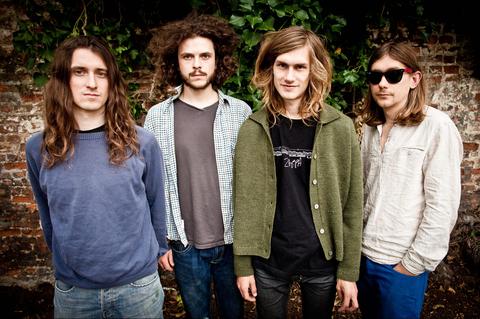 Listen to Ode To The Summer

Syd Arthur, a quartet of Canterbury-based devotees of sound immersed in the simple pleasures of songwriting, performance and exploratory musical interplay, released their debut album On An On this July 2nd.

Greatly inspired by the sonic pioneers of the late 60s and early 70s, they have patiently learned how to engineer, produce and mix themselves, using an innovative hybrid of analogue and digital techniques. Naturally, in 2009, Wicker Studios, their own studio space was created, followed by their record label, Dawn Chorus Recording Company. Syd Arthur may revel in the music of decades long past but, as psychedelic rock goes, they match the hallucinogenic sounds of modern contemporaries like Wolf People, Black Mountain, Tame Impala, even Making Dens era Mystery Jets - with imaginative, whimsically sweet, melodies.

When the band released early tracks in 2010 (on their Moving World EP) they were swiftly picked up by The Guardian and included in their Band of The Day feature. Here, on their debut album proper, they seamlessly mix bucolic, retro reveries, devastating blasts of precision controlled riffing, sweeping folk, fleet-fingered mandolin work and a musical vocabulary that’s as fluently conversant with world music as it is the time signature twists of Soft Machine. That these influences are successfully integrated into their songs rather than merely grafted on as stylistic affections says a lot about the band’s desire to hone their craft. And hone it they very much have on debut album On An On
.
Building upon the themes of the live studio interplay explored on previous releases and their live set, On An On finds the band in fine form, with the 8 minute live work out of Paradise Lost being performed live in the studio as an ensemble. Due care was taken to try new approaches, resulting in more layered soundscapes such as in Moving World and Edge of the Earth. New instruments and textures are given a chance to shine in tracks like Dorothy where swirling keys take on an integral role, and the continued use of Raven Bush’s string compositions are also furthered on tracks such as First Difference. Lyrically, the poetry, honesty and mystique of Liam Magill’s vocals have been brought to the forefront, as he muses on life and draws on imagery from the dream-world.

Syd Arthur’s intricate, high-energy live sets, which to date include Glastonbury and Secret Garden slots, have resulted in a large following emerging – one that is also burgeoning in Europe as they continue to pick up tours in France, Belgium, The Netherlands and most recently Italy. This is an accomplished live band.

With the benefit of an extra 40 years of popular music culture, WOMAD festivals and the entire world’s musical output at their fingertips, the Psychedelic genre no longer sits, gathering dust, in the decades gone by. Syd Arthur embrace its origins, lodge their feet in the present, and hold up a triumphant head, pointed firmly at the future.

The show at VEVO TV Control Room on Saturday, March 16