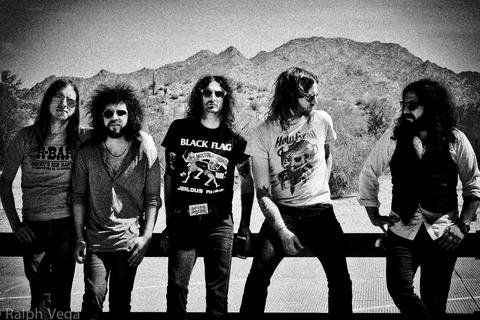 Listen to Polygon Of Eyes

Trends in music are cyclical. Every few years something comes along that borrows just enough from the past to make the new exciting again. Scorpion Child produce a sound that hearkens back to when guitar rock ruled the airwaves and made going to a concert the ultimate main event. The five-piece hail from Austin, Texas where they’ve spent the last few years perfecting both their songwriting and stage presence. The outfit features Chris Cowart and David Finner layering high-energy twin-guitars over the band’s pounding rhythms discharged by Shaun Avants (bass) and Shawn Alvear (drums). Last but not least, Scorpion Child’s singer, Aryn Jonathan Black, fronts the cavalry with a siren-like voice reminiscent of Ronnie James Dio and Robert Plant.

Black says, “I’ve always wanted to hear new musical ingredients within a classic heavy sound, and it’s great to witness captivating performances where both the live show and the band’s recorded material can compliment one another. It’s important for us to maintain spontaneity while putting a special emphasis into integral hooks. The heavy-prog sounds of Uriah Heep, Hairy Chapter, and the epic delivery of early Rainbow showcases these crossovers brilliantly, giving us honest, yet relentless sonics.”

On May 17th, 2013, Scorpion Child will release the self-titled debut on Nuclear Blast Entertainment. The album was produced and arranged by Chris “Frenchie” Smith, who is known for his work with The Answer, Jet, And You Will Know Us By The Trail of Dead, Dax Riggs, and many others.

Scorpion Child’s debut is a hybrid of eight, hook-filled heavy-psych classics that breathe new life into a stale hard rock market. Big drums, thunder heavy riffs, licks, dangerous soul ridden bass lines, and powerful rock vocals transferred flawlessly to their recordings, conveying the sexiness that they move and shake to on stage. The band plan to support the May album release with tours in the United States and Europe throughout the year 2013.