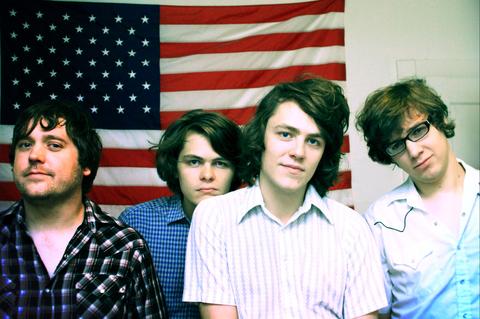 Trapper Schoepp has the ear of a troubadour, the eye of a journalist and the heart of a young poet. He began writing songs at a tender age with startling facility, distilling rock, folk and country traditions into tunes that are at turns spirited and melancholy. Themes ranging from pride of place, love and adventure shine with surprisingly sophisticated metaphors for a songwriter so young. Run, Engine, Run won’t be out of place filed next to other artists distinguished for their early talent like Justin Townes Earle, Ha Ha Tonka and Lucero. Trapper, his brother Tanner, and the rest of their band the Shades offer this album as a love letter to their beloved home state of Wisconsin, and SideOneDummy will release it internationally on September 25, 2012.

Like his namesake M*A*S*H surgeon Trapper John, the 22-year-old Wisconsin songwriter found himself prepping for surgery a month before recording his band’s third and latest album, Run, Engine, Run, the result of a gnarly BMX bike crash 6 years earlier. Fortunately, in the interest of him having a safer hobby, his mother gave him a guitar after the accident. Trapper was then able to turn his experiences on the operating table at the Mayo Clinic (for spinal decompression surgery) into songs like the Stones-flavored rocker, “Pins and Needles.”

The title track refers to a red Mercedes Benz the Schoepps inherited from their grandfather. “We knew our grandfather wouldn’t see another Christmas on his South Dakota farm. The chores were over for the day, but our grandpa said he could use a quick hand in the shed,” Trapper explained. That’s when he unveiled this ruby red 1964 Mercedes Benz, idling in a kind of out of place majesty alongside archaic farm equipment and rusted tools. The brothers jokingly asked their grandpa if they could drive it home to Wisconsin. They were soon scrambling around the nearest town looking for roadworthy tires. Schoepp sings:

“He won her at an auction just a couple months before
It seemed he gave away everything he saved up to afford
He wore a cowboy hat, a pearl snap shirt
Got up real early for his daily work
He was tied to a tradition from a long time ago”

“’Run Engine Run’ has a lot of meanings for me. My grandfather’s way of life was tied to timeless farming traditions passed down from generation to generation, the same way a songwriter is tied to and nourished by traditional songs. Musicians need to keep the engine running, to keep moving forward. The song is not only an ode to the car our grandpa gave us, but a nod to the perseverance of farmers in the Badlands and to preserving traditions.” Tanner agrees: “It’s about inheriting something of value from the past in a way that is not nostalgic, but vital and never-ending. The album title is a request for resiliency, a way of honoring the past, without getting stuck in it.”

“As a rock n’ roll band, we play music that has absorbed a whole range of stylistic overtones,” Trapper says of the musicality he’s after with the help of his band, The Shades. “In a sound bite world, it’s crucial to regard certain music not as a static art, but one that transcends tidy categorization. A radio station once said our music is ‘as much Pavement as Parsons.’ I thought that was telling, because this album has a little bit of everything - rock, country, power-pop, even some punk.”

Trapper and Tanner grew up harmonizing with each other in the small rural town of Ellsworth, WI, which is known as the Cheese Curd Capital of the World. Although there’s little trace of a music scene in Ellsworth, the brothers became immersed in the folk, blues, and rock soundscape of American music thanks to the classic rock CDs they discovered in their father’s Suburban. The beginnings of the band came together while the Schoepps were still in high school, playing covers and Trapper’s earliest original songs. When Trapper and Tanner moved to Milwaukee for college, the band adopted the moniker the Shades and
began a steady schedule of club and festival dates, somewhat hampered by the fact that they still weren’t of legal drinking age. The group cemented their spot as a band-to-watch with the release of 2007’s A Change in the Weather, a collection the band financed, produced and released on their own. Critics commended Trapper’s heartfelt songwriting and the band’s hard-hitting arrangements.

Shortly thereafter, Trapper discovered Gram Parsons and added a bit of cosmic cowboy music to the mix. “When I was a freshman, we had our first raucous party in our apartment, and were concerned that our older neighbor upstairs was going to be upset. The next morning there was a 30 pack of Pabst Blue Ribbon beer and a stack of Gram Parsons CDs by our back door. That’s when we knew we’d found the right house to live in.”

The band recorded 2009’s Lived and Moved and solidified a new lineup by adding Jon Phillip and Graham Hunt. Original guitarist David Boigenzahn and violinist Gina Romantini sit in as often as their schedules permit, allowing the group to experiment with their sound and surprise fans with unexpected shifts of tone and live dynamics.

While it’s difficult to capture the band’s live charisma on record, Run, Engine, Run comes close with 12 well-crafted tunes that describe the everyday triumphs and tragedies of Midwestern life. As soon as the album hits the streets, The Shades will take to the road, bringing their heartland rock to the masses. “There’s a blues song by the Rolling Stones called ‘No Expectations’ that hits on a person moving forward and not looking back,” Trapper says. “I hear the song as the story of a young, lonely rambler or musician who’s lost wealth and love, but accepts the fact that there’s a whole world ahead of him. I’m young, so I look at this as an opportunity to press on and share songs. Right now I have no expectations other than to keep on keepin’ on.”