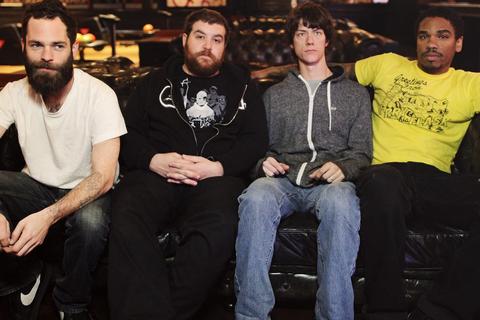 For a band with so little pretense, sometimes it can be easy to forget just how much the respected DC quartet Lionize has accomplished since their inception in 2004. From being the first band to play both Bonnaroo and the Vans Warped Tour in the same year to their five full-length albums to virtually non-stop touring year after year, the groove-heavy rock group has dared to do more than most bands could ever hope to accomplish. On the release of their most recent album, Superczar and the Vulture, produced by the famed J. Robbins and their first on Pentimento Music Company, the band showcases their live sound in a way that they have never done before, allowing the listener an unprecedented look at the experience of hearing the songs played live in front of them. “Superczar was the first time we were really intent on capturing the sound of the band live. We had done so much touring in the interim between records that our style had begun to change quite a bit,” says bassist Henry Upton who established the group in 2004 with vocalist/guitarist Nate Bergman and keyboardist Chris Brooks. Drummer Mel Randolph completed the current line-up when he joined the band in 2007. Upton goes onto explain that on the new record, “our influences crystallized and we had a greater sense of identity… we also tried to create "song suites" for the first time on this record, where there's 10-15 minutes of uninterrupted music, something more ambitious than we'd done before. It's definitely the most complete, distinct Lionize record so far.” Doubtless, the band’s long tenured members and extremely heavy touring schedule have contributed to the evolution of their distinct brand of dark reggae-infused rock. “Having the same group for so long has led us to be able to open things up musically. We get along shockingly well,” muses Brooks. “Touring has a way of making you a better player at your craft, and as a band. It has allowed us to build a reputation for ourselves as being a great live show and really cutting deep into improvising,” says Randolph. All of this makes it obvious that for the members of Lionize, music is not only a passion but an integral part of who they are. “We really are just 4 guys who get together in a basement and jam. Whatever comes out of that is where we will go. As a band we never really try to discuss the direction of the sound or songs, we really just play what we think is the grooviest and heaviest jam we can, and let the music take us forward,” claims Bergman. This straightforward approach embodies the hard-working, every-man ethics that are at the very heart of Lionize, and has led to both critical acclaim and an ever-growing fan base for the band. Bergman continues, “The shows keep getting bigger, and the tours get better. More and more people continue to spread the word and come out.” Chimes in Randolph, “Our fans are very loyal. They range from their mid-teens to upwards of their late 40s. It’s cool having a wide spread of generations as fans of our music.”