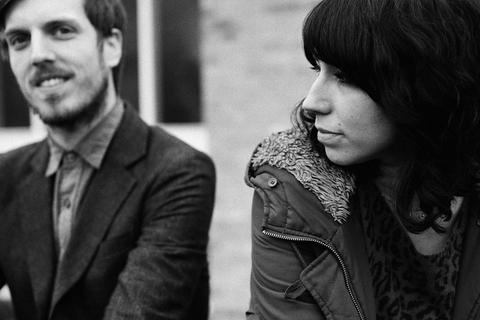 When you hold the kind of resume that Jessica Dobson does, you have options. You can continue to parlay your role as an established touring musician into enviable gigs that will earn you a paycheck, or you can choose to close that chapter for the chance to write another. Dobson recently opted for the latter, leaving behind her life as a touring guitarist lending support to a constellation of acts including Beck, Yeah Yeah Yeahs, and The Shins, to focus completely on her own band, Deep Sea Diver, which she helms along with drummer and husband Peter Mansen.

Deep Sea Diver has enjoyed a swift rise through the Seattle music scene, to which they are relative newcomers. The attention they’ve garnered is attributable in part to a spell-binding live show in which the physicality of Mansen’s drumming is on full display, along with Dobson’s ability to command a room with nothing but her voice.

The band’s relocation to Seattle came at the end of the recording process for their debut album, History Speaks. The move was a risk, but one that afforded them a much-needed opportunity to start fresh. Embarking on a slow burn, they began by playing some of the city’s most obscure venues for tiny crowds. Meanwhile, Dobson and Mansen engaged in a feverish DIY campaign from their bedroom, packing and shipping albums to prospective labels, making cold calls, working hard to gain traction amidst a sea of other clamoring voices.

Initially the silence was deafening. They wondered if they were deluding themselves. Was the record even any good? Despite the existential gut check, they continued to grind away. Within weeks they began to see results, graduating from the dives of Georgetown to the more reputable clubs up on Capitol Hill. Soon they were playing a sold out record-release show at the Columbia City Theatre, and being recruited to share bills at some of Seattle’s most prominent indie rock venues. In the midst of all this, public radio powerhouse KEXP put History Speaks into regular rotation.

Deep Sea Diver originally served as a vehicle for Dobson’s solo work. During a 2006 trip to Seattle to record with Phil Ek (Fleet Foxes, The Walkmen), she met Mansen in a chance encounter at a coffee shop. Several years later, married and living in Southern California, they had begun working on new material with bassist John Raines and guitarist Sean Walker in a rehearsal space behind the Long Beach home of cult recording legend Matt Wignall. Upon overhearing them one day, Wignall invited the group to record in his analog home studio, a departure from the hermetic, digitized world of big budget studios Dobson was used to. History Speaks would be the fruit of those sessions.

The album is a study in dynamics. Mansen and Raines weave an interlocking lattice of angular rhythms, shifting smoothly between various time signatures and nuances of syncopation. Their foundation is accented by supplemental percussion from long-time Tom Waits collaborator Stephen Hodges. Across this bed of cadences Dobson spins taut, staccato figures with her guitar. Spooling out with a gentle insistence, they serve as a backdrop for her evocative voice, its clarion tonality a ribbon that runs through the entire album.

Fortunately, the group’s technical proficiency does not lead to imaginative atrophy. Rather than turning out a dozen variations on the same theme, History Speaks finds the quartet segueing easily between a variety of styles, from punchy, driving cuts like “Weekend Wars,” to the cavernous spaces that close the album.

They light a fuse with tense opener “Ships,” immediately showcasing their penchant for tightly knit arrangements over which Dobson’s vocals soar and bend. “You Go Running” begins with an airy guitar riff and hint of steel drum, only to give way to the lilting swing of “Keep It Moving.” As the album winds down it stretches and spreads out, svelte opening numbers giving way to the spare, mournful build of “Why Must A Man Change?” “Tracks of the Green Line,” and eponymous curtain call, “History Speaks.”

In recent months, the group has had an increasing number of opportunities to take their live show on the road, and the response from audiences has been remarkable. Following a co-headlining tour with Seattle’s Bryan John Appleby, Deep Sea Diver opened a series of dates for The Shins, during which, despite being the opening act, they received standing ovations in multiple cities. This fall saw the group co-headline a series of west coast shows with Chicago natives Wild Belle. They have dates booked throughout the remainder of 2013, during which they will be touring full-time in support of History Speaks.