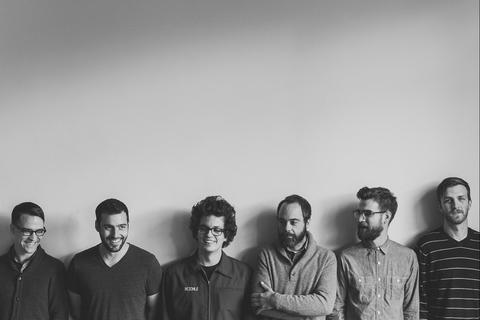 To hear Pickwick tell it, their popular Myths 7-inch series was merely a group of rough sketches they’d been developing over the previous two years put to wax. That a CD collection of those “demos” held their hometown Seattle’s Sonic Boom Records #1 sales spot for a period of weeks in 2011 shows those six songs amounted to something more than tossed off basement recordings. With a successful year of festival invites and an ever larger string of hometown sell-outs behind them in 2012 the band refocused on recording and have a year later emerged with Can’t Talk Medicine. Upgrading from the basement used for Myths and setting up shop in their living room, the band’s own multi-instrumentalist Kory Kruckenberg served as engineer. The 13 finished tracks include three re-recorded and fully realized Myths cuts and a collaboration with Sharon Van Etten on lead single “Lady Luck.”

“A cool thing about this record,” says Kruckenberg, “this house has made its way onto the record. We've tried to include the quirks of living here.” Guitarist Michael Parker wryly spins the situation differently saying “our record doesn't sound like a lot of other records because it was recorded in this living room.” The choice of a carpeted location may have been a double-edged sword, but the use of this unconventional space was fully compatible with the band’s own grittier leanings and desire to establish a unique musical aesthetic. By recording to 1/2 inch tape on an 8 track and incorporating found sounds, Kruckenberg was additionally using a canvas that provided for an intentionally different dynamic than a modern digital effort. Why tape? “It's about dirtiness,” Kruckenberg explains referring to the distortion that the taping process itself can imbue on a recorded sound. He reports his final results with a grin, “It’s raw.”

An audiophile’s full attention to every detail shows in the final mix: voices and instruments have the space to assert their full identity and tones shimmer in lengthy decay. The percussive clang of the piano hammers in lead track “Halls of Columbia” are incorporated instead of hidden away. The organ drone in “Window Sill” is elevated from dissonant psych clutter to an erie foundational element. The harmonies of Parker, keyboardist Cassady Lillstrom, and guest Kaylee Cole are at turns sweet, unsettling and epiphanic. It’s all orchestrated to support frontman Galen Disston’s gospel growl and build on the mood of his words.

“There is a layer to our songs that I don't think very many people have picked up on,” says Disston, who prefers listeners delve into their own imagination with his words over providing a literal history of every lyric. What he will relate is that Can't Talk Medicine mines themes of mental illness. “It’s about art making you go crazy,” he reveals. “We idolize and value that insanity when it's in the name of art." But as his lyrics also imagine it, life in creative overdrive can be nervous, desperate and grotesque. The refrain in “Window Sill” speaks of planning a defiant suicide and Myths crowd favorite “Hacienda Motel” recounts a risque homicide.

Many of the deeper answers about influences and a preference for mystery can be traced to the band’s own voracious interest in music that’s mired in obscurity. Reissues from Designer Records, the seminal output of the Black Ark. Robert Pete Williams, Alan Lomax, the Walkmen, The Sonics, and Abner Jay are among the diverse list of names referred to with reverence in the living room. ‘Famous L. Renfroe as The Flying Sweet Angel of Joy’ is a current well of inspiration for Disston who, like his idol Bob Dylan, has through his own deep exploration of American roots music developed a signature vocal delivery. Pickwick’s DIY history of making & distributing their own records continues into 2013 with the Spring self-release Can’t Talk Medicine, initially available digitally via online retailers and physically at your local CIMS-affiliated independent record shop. The Cold War Kids’ Matt Maust is guilty of the album’s cover design. The band travels to SXSW in March before embarking on a headlining tour of the continental U.S. in April.